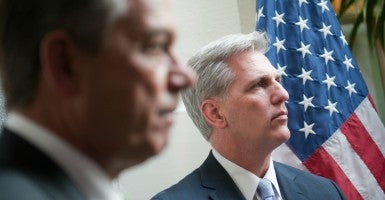 After the announcement that John Boehner will step down as House speaker, eyes turned toward the next Republican who will fill the high-ranking role.

With speculation and talk of who will take over Boehner’s position after he leaves Capitol Hill on Oct. 30, but no real answers as to who will step in, here are nine potential contenders for the job who have been mentioned in media accounts. Hensarling, 58, has been in Congress since 2003. He backed out of the majority leader race in 2014. It has been reported that Hensarling will decide early next week if he will run for House speaker.

Hensarling was once named an Eagle Scout, holds a law degree from the University of Texas, and spent 10 years working in private business.

Jordan, 51, chairs the House Freedom Caucus and is the leading the fight to end taxpayer funding for Planned Parenthood.

During his undergraduate studies at the University of Wisconsin, he was a wrestling champion. He went on to get a master’s degree in education and a law degree from universities in Ohio. After taking office in 2011, Labrador, 47, ran for majority leader in 2014. Originally from Puerto Rico, Labrador moved to the states as a teen. He worked as an attorney and served in the Idaho House of Representatives before coming to Capitol Hill. The second-ranking Republican in the House chamber, House Majority Leader McCarthy, 50, got this job in June 2014 after Eric Cantor lost in the GOP primary back home in his Virginia district. McCarthy has represented California in Congress since 2007.

In his younger days he started a deli with $5,000 he won in the lottery, received a master’s degree in business administration, and was an intern for Rep. Bill Thomas, R-Calif. He later worked as one of Thomas’ staffers—and took over his congressional seat after Thomas retired. Rodgers, 46, has the current No. 4 position in House leadership as chairwoman of the House Republican Conference. Her background includes growing up on a farm and having worked for her family’s business. She became a member of Congress in 2005, and gave birth to three children while in office—the only member in Congress’ history to do so. She may opt for the majority leader job instead. Price, 60, is an ambitious conservative, formerly in leadership, who has been a member of Congress since 2004.

The Atlanta Journal-Constitution reported that he has asked members of the Georgia delegation to not endorse anyone for top leadership until they speak with him. Roskam, 54, is in his fifth term, starting as a congressman in 2007. In 2014, he ran for majority whip. He worked for Rep. Henry Hyde, R-Ill., before getting a law degree, after which he practiced law.

The Washington Post reports that Roskam has been a key player to try to get the House to vote on three bills that do not approve of the Iran nuclear agreement. The current Republican whip, Scalise, 49, was in the Louisiana House and Senate before he joined Congress in 2008. A former job title of his was “systems engineer.” If he doesn’t run for speaker, he could try to ascend to majority leader.

Webster, 66, ran against Boehner as speaker in January after the new Congress convened. He was first elected to office in 2010 and served in the Florida Legislature before coming to Washington.