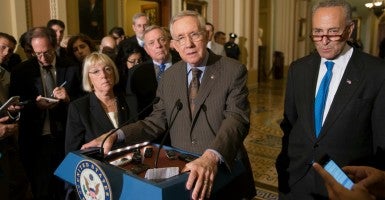 Senate Democrats have blocked the Pain-Capable Unborn Child Protection Act from moving forward in the Senate.

The Pain-Capable Act needed 60 votes in order to invoke cloture, but failed Tuesday in a 54-42 vote.

Sens. Joe Manchin, D-W.Va.; Bob Casey, D-Pa.; and Joe Donnelly, D-Ind., were the only Democrats to support the bill. Sens. Mark Kirk, R-Ill., and Susan Collins, R-Maine, broke with Republicans to oppose it. (See below how your senators voted.) Sen. Lindsey Graham, R-S.C., who introduced the House-passed legislation in the Senate, said in a statement that “America is at her best when she’s standing up for the least among us.”

“Even though we were not successful, this votes marks an important milestone when it comes to protecting the unborn,” Graham said. “We took the first vote in the Senate and were able to see where every Senator stands. Today, the battle begins working to bring more supporters to our cause.”

“I view today’s vote as the start of a journey, much like the one we used to pass the Unborn Victims of Violence Act and the Partial Birth Abortion Ban into law,” Graham added. “The sooner this legislation becomes law, the better. We are on the right side of history.”

Sarah Torre, a policy analyst at The Heritage Foundation, called the vote “disappointing.”

“This policy would have been in line with the interest of the vast majority of Americans—including nearly 60 percent of women—who support limits on dangerous and gruesome late-term abortions performed after 20 weeks,” Torre said.

“National leaders’ failure to protect women and unborn children from late-term abortion has made U.S. policy on abortion the most extreme among developed nations. We are one of only seven countries in the world—including North Korea and China—that allow elective, late-term abortions after five months,” she added.

Marjorie Dannenfelser, the president of Susan B. Anthony List, said in a statement:

Defending children from painful late-term abortion is a winning issue and, along with stopping taxpayer funding for America’s largest abortion business, is an issue of great consequence to the 2016 election. … A majority of Americans – including Independents, women, youth, and even Democrats in some states – support this modest proposal to get the U.S. off the list of only seven nations to allow late-term abortion.

A recent Quinnipiac poll shows that 60 percent of Americans support the passage of pain-capable legislation.