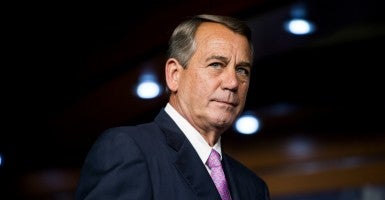 House Speaker John Boehner is staying focused on fundraising as members of the House Freedom Caucus criticize that his leadership has undercut the conservative agenda. (Photo: Bill Clark/CQ Roll Call/Newscom)

John Boehner is barreling through conservative charges that the speaker is not doing enough to defund Planned Parenthood, keeping his eyes toward a busy fundraising schedule while a potential government shutdown looms over a fractured House.

In an interview with Politico Sunday, Boehner sidestepped repeated criticisms from members of the House Freedom Caucus that his leadership has undercut a conservative agenda.

“I don’t think they understand I’m as conservative as they are. When I voted regularly, I had the eighth most conservative voting record in Congress. And the idea that I’m the establishment, that I’m some RINO, is just laughable. It really is,” he said from Seattle during a fundraising trip.

Congressional leadership has pushed against conservative threats to reject the spending measure needed to keep the government open unless Planned Parenthood’s more than $500 million in federal grants is stripped from the bill.

Boehner said he has been “talking to our members and trying to find our way through a difficult situation.” Politico reported aides close to the speaker say he is “intent” on averting a government shutdown over the group’s federal funding.

The divide has sparked elevated scrutiny of Boehner’s leadership tactics, evoking renewed threats from conservatives to undermine his speakership this fall if he pivots against their defund tactics.

Instead of launching a counteroffensive, Politico reported Boehner “appears as though he is trying to ignore the drama and push through what his allies say is as aggressive a fundraising schedule as ever.”

“Garbage men get used to the smell of bad garbage. Prisoners learn how to become prisoners, all right?” Boehner said. “You can teach yourself to do anything, especially if you’re committed to a cause. I came to Washington to fight for a smaller, less costly and more accountable government.”

GOP charges against Planned Parenthood emerged following a slew of covert videos showing top officials from the group discussing the sale of fetal organs. The organization has denied wrongdoing, maintaining the videos are “heavily edited.”

Rep. Jim Jordan of Ohio, chairman of the House Freedom Caucus, has emerged as a chief adversary in the rift, telling C-SPAN’s “Newsmakers” the group “should not get another dime,” according to The Hill.

The White House said President Barack Obama would reject any spending measure that does not include Planned Parenthood funding, but Jordan maintained his conviction that a defund attempt is still viable.

“We just need to make that case in a compelling, repetitive way, over and over again, so the American people clearly understand what’s at stake here,” Jordan said.

Congress has less than two weeks to strike a deal before the spending measure expires.