What’s Missing From the Washington Debate on Criminal Justice Reform 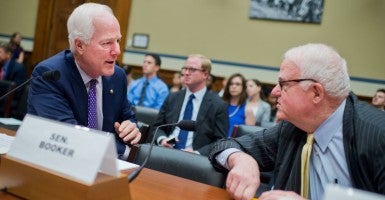 There has been a lot of talk lately on Capitol Hill about criminal justice reform, and it is expected that both the House and the Senate will take up the issue now that Congress is back in session.

Rumor has it that behind-the-scenes discussions are taking place to try to forge bipartisan, bicameral compromise on the issue.

A more accurate description of what is being discussed, however, is criminal sentencing reform.

While this is a generally positive development, in some ways the discussion has been woefully incomplete, which is both disappointing and surprising.

What’s been missing from the discussion so far? Mens rea reform.

While sentencing reform addresses how long people should serve once convicted, mens rea reform addresses those who never should have been convicted in the first place—people who engaged in conduct without any knowledge of or intent to violate the law and which they could not have reasonably anticipated would violate a criminal law.

It is therefore disappointing that mens rea has not been in the reform conversation, because one of the greatest safeguards against overcriminalization—the misuse and overuse of criminal laws and penalties to address societal problems—is ensuring that there is an adequate mens rea requirement in criminal laws.

It is also surprising because mens rea reform was a consistent theme throughout the year-long set of hearings conducted by the U.S. House of Representatives Committee on the Judiciary’s Over-Criminalization Task Force.

The task force subsequently devoted an entire hearing to the issue, titled “Mens Rea: The Need for a Meaningful Intent Requirement in Federal Criminal Law.”

Moreover, mens rea reform is, or at least should be, a bipartisan issue.

Prominent Republican and Democratic members of the House Over-Criminalization Task Force seemed to agree on the need for mens rea reform.

For instance, Republican Chairman Sensenbrenner stated that, “[t]he lack of an adequate intent requirement in the Federal Code is one of the most pressing problems facing this Task Force[.]” Lending his support to the issue, Ranking Member Robert “Bobby” Scott, D-Va., stated:

The mens rea requirement has long served as an important role in protecting those who did not intend to commit a wrongful act from prosecution or conviction[.] … Without these protective elements in our criminal laws, honest citizens are at risk of being victimized and criminalized by poorly crafted legislation and overzealous prosecutors.

Similarly, during a hearing about the scope of regulatory crimes, Congressman John Conyers, D-Mich., stated:

First, when good people find themselves confronted with accusations of violating regulations that are vague, address seemingly innocent behavior and lack adequate mens rea, fundamental Constitutional principles of fairness and due process are undermined. … Second, mens rea, the concept of a “guilty mind”, is the very foundation of our criminal justice system.

Following the completion of the task force’s hearing, the Democratic members of the task force and the Subcommittee on Crime, Terrorism, Homeland Security, and Investigations issued a report in which they stated:

Federal courts have consistently criticized Congress for imprecise drafting of intent requirements for criminal offenses. …. It is clear that the House and Senate need to do better. We can do so by legislating more carefully and articulately regarding mens rea requirements, in order to protect against unintended and unjust conviction. We can also do by ensuring adequate oversight and default rules when we fail to do so.

In a recent Heritage Legal Memorandum, I wrote of the pressing need for mens rea reform, something Heritage scholars have written about on other occasions.

The fact of the matter is that there are nearly 5,000 federal criminal statutes scattered throughout the 51 titles of the federal code, and buried within the Code of Federal Regulations, which comprises approximately 200 volumes with over 80,000 pages, there are an estimated 300,000 or more (in fact, likely much more) criminal regulatory offenses or so-called “public welfare” offenses.

Many of these laws lack adequate, or even any, mens rea standards—meaning that a prosecutor does not even have to prove that the accused had any intent whatsoever to violate the law or even knew he was violating a law in order to convict him. That means that innocent mistakes or accidents can become crimes.

There is a serious problem when reasonable, intelligent people are branded criminals for violating laws or regulations that they had no intent to violate, never knew existed, and would not have understood applied to their actions even if they had known about them. As Rep. Scott recently stated:

The real question before us is how to address not only the regulations that carry criminal sanctions, but also numerous provisions throughout the Criminal Code that also have inadequate or no mens rea requirement. … Addressing and resolving the issue of inadequate or absent mens rea and in all the criminal code would benefit everyone.

Any reform legislation should address and improve the problems with current law pertaining to mens rea standards as well as sentencing reform. Let’s have real criminal justice reform that is worthy of the name. The time for mens rea reform is now.