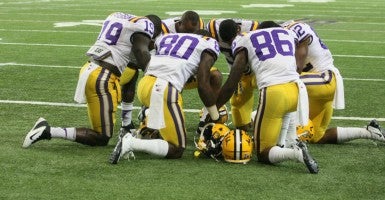 An atheist group, the Freedom From Religion Foundation, sent a report to public universities saying it is unconstitutional for them to provide chaplains for their football teams. The report says the universities "cannot endorse, promote, or favor religion." (Photo: Greg McWilliams/Icon SMI/Newscom)

The Freedom From Religion Foundation, an atheist group, has sent a report to public universities claiming that providing chaplains to their football teams is unconstitutional.

“Simply making these chaplains available does not somehow mean the schools are unconstitutionally endorsing any particular religion or even religion in general. The universities should simply ignore these unfounded demands from anti-religious groups, especially since the courts have upheld similar chaplain programs in a wide variety of other contexts for decades.”

The report from the Freedom From Religion Foundation states:

Public universities and their employees cannot endorse, promote, or favor religion. Yet, many football coaches at public universities bring in chaplains—often from their own church or even members of their own family—to prey on and pray with students, with no regard for the rights of those students or the Constitution. These coaches are converting playing fields into mission fields and public universities are doing nothing to halt this breach of trust. They are failing their student athletes.

In a statement regarding the report, the atheist group claims it provides evidence that football coaches at public universities “impose their personal religion on players by hiring Christian chaplains,” in violation of the First Amendment.

ADF refutes the group’s contention in its letter.

“[P]ublic universities have great leeway in accommodating the religious needs of their students, and providing chaplains is one time-honored and constitutionally permissible method for doing so.”

The letter adds that the Establishment Clause “affirmatively mandates accommodation, not merely tolerance, of all religions, and forbids hostility toward any,” and that “[n]o court has ever said that public universities may not utilize chaplains for their athletic teams.”

In a statement, ADF Senior Legal Counsel David Hacker said “[w]e hope these universities will disregard the illegitimate demands of Freedom From Religion Foundation, which is distorting the true meaning of the First Amendment.”