4 Ways to Fix Economies Around the World 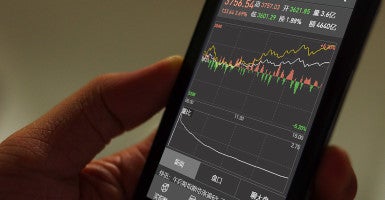 There are ways to change economies for the better. (Photo: Imaginechina/SplashNews/Newscom)

Something’s amiss with the world’s economy. And it goes way beyond stock-market woes in China and elsewhere.

Economists point to debt and low economic growth as the culprits, but this explanation only touches the surface. To turn around the world’s economy, we’ll need to understand the deeper problems.

A study just published by the Heritage Foundation provides some answers. A 2015 Global Agenda for Economic Freedom, authored by James M. Roberts and William T. Wilson, identifies a set of distinct economic problems now afflicting the world’s economies. The most serious are the huge costs associated with oversized governments.

The 2015 edition of Heritage’s and The Wall Street Journal’s Index of Economic Freedom showed that the growing size of governments is the most negative and striking trend in the global economy. Reflecting the tendency of China and other governments to engage in so-called “stimulus” spending, the score measuring government spending dropped 0.8 points in the 2015 Index. It is this negative trend that accounts for much of the world’s debt crisis.

Other declining Index scores showed that, on a global basis, freedoms to conduct business, exchange labor, protect property, and make financial transactions have suffered as well. These factors are a drag on economic growth and investment. When added to the massive overlay of debt caused by too much government spending, they act like an undertow, forever pulling back on the tide of economic growth and progress.

That’s the problem: a lack of economic freedom on a global scale. But what’s the solution? Roberts and Wilson argue that the world economy must change direction in four major areas.

The first is a dramatic improvement in trade and investment freedom. There is quite simply not enough of either. The Doha Round of global trade talks has floundered, and the U.S. has been a late starter to spurring trade talks with Asia and Europe.

To turn things around, the U.S. should focus on ensuring that trade negotiations actually free up trade, not on managing or regulating it. There should be more bilateral free trade agreements. Programs such as the Generalized System of Preferences (GSP) and the African Growth and Opportunity Act should be expanded, and anti-dumping and countervailing duty regulatory measures should be avoided.

Second, workers should have more freedoms to move to where the jobs are. This is true globally, but it’s also true for the U.S., which should issue more H1-B visas and expand the Visa Waiver Program. That expansion can start with allies like Poland that have long deserved inclusion. Doing so would significantly boost tourism and business travel to the U.S.

Third, many of the world’s economies are hobbled by corruption. It’s a huge issue in China, but it’s a global problem as well. The Heritage study argues for a multi-pronged assault on corruption. Government bureaucracies need to be shrunk. Watchwords for all governments should be transparency, judicial reform, and the rule of law to protect property rights and the sanctity of contracts. Governments also need to stop trying to control all aspects of land ownership.

Finally, the world needs less crony corporatism. Massively subsidized state-owned enterprises in China and elsewhere are magnets for corruption and unsustainable debt. They starve out the private sector and kill competitiveness. Eliminating economic favoritism should be a top priority for all international trade deals and economic policies.

There really is no mystery to why some economies grow and others don’t. Economic freedom is the key. Part of the answer is getting governments to stop actively harming private enterprise, but that is not the whole of it. It’s also establishing institutional frameworks like the rule of law and the sanctity of contract to combat corruption. This is the value of the Heritage study. It points to a holistic solution to what is really a global problem.