Should Mt. McKinley Be Renamed Denali? 35 Tweets on the Pros, Cons, and Obama’s Use of Executive Power 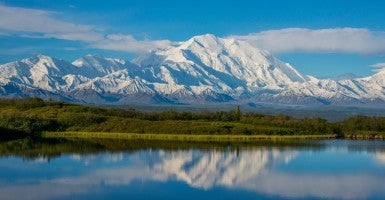 The White House said the renaming of North America’s highest mountain peak honors the “sacred status” of Denali to Alaskan natives who hold it as a “site of significant cultural importance.”

The announcement caused immediate waves on Twitter as critics of the decision noted the historic importance of the mountain’s previous namesake, President William McKinley, while supporters lauded Obama’s move as a recognition of native Alaskan culture.

I’m disappointed with the Administration’s decision to change the name of Mt. McKinley in Alaska (1/5) — Rob Portman (@senrobportman) August 31, 2015

Pres McKinley was a proud Ohioan, and the mountain was named after him, as a way to remember his rich legacy after his assassination (2/5)

The naming of the mountain has been a topic of discussion in Congress for many years (3/5) — Rob Portman (@senrobportman) August 31, 2015

Today we are honored to recognize America’s highest peak officially as Denali, or ‘The Great One.’ http://t.co/lxd3HKAOBo

My full statement on @POTUS ignoring an Act of Congress and changing the name of Mount McKinley. pic.twitter.com/nsLLOiUBU8 — Rep. Bob Gibbs (@RepBobGibbs) August 31, 2015

As POTUS once again oversteps his bounds, Ohio knows every carnation is a monument to our own William McKinley. -John pic.twitter.com/GvQfqnIKOh — John Kasich (@JohnKasich) August 31, 2015

I don’t really care much what they call Denali/McKinley, but since when do presidents have this unilateral power?

As a compromise, why not name a mountain in Ohio after William McKinley? https://t.co/hhsmjnyerL

Dramatic vista from the highest peak in Ohio, which we could rename after Pres. McKinley? https://t.co/eaNvqeuKrw pic.twitter.com/p1SQi4EmXB — Nate Silver (@NateSilver538) August 30, 2015

I’ve been to Alaska a few times now and never heard any local call it “McKinley.” (Also, they are VERY TIRED of Russia jokes.) — daveweigel (@daveweigel) August 31, 2015

Boehner says McKinley “led this nation to prosperity and victory in the Spanish-American War” & deserves that peak was named for him. — Mark Knoller (@markknoller) August 31, 2015

Why did Pres Obama change the name of Mt McKinley-why not let the people decide?

These seemingly subtle words carry a lot of power. This isn’t a “re-naming,” it’s an acknowledgement of the Indigenous place name. #Denali

If Alaskans call it #Denali and there’s currently a bill in Congress to rename it, why is executive action necessary? #MtMcKinley — Zoë (@zoyarae) August 31, 2015