After EPA Spills Toxic Waste in Colorado River, Nearby Residents Hope for Recovery 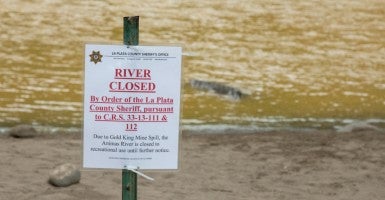 A "river closed" sign appears on the Animas River due to toxic waste released by the EPA at the King Gold mine in Silverton, Colo. (iStock/KaraGrubis)

Days after a federal agency accidentally released millions of gallons of contaminated mine water into a major waterway, neighboring local businesses are speaking out about how the incident impacted them.

On August 5, the U.S. Environmental Protection Agency mistakenly discharged more than 3 million gallons of polluted water from an abandoned mine into the Animas River, a tributary of the San Juan River in southwest Colorado.

In the interest of “public safety,” local authorities in La Plata County, Colo., closed the Animas River to all watercrafts.

The restrictions have deeply affected a region that relies heavily on the river for agriculture and tourism.

He said the long-term impact is less certain.

“It is very moving when you realize most people contacting you express more interest in the well-being of those they provide for, than for themselves,” Zalneraitis said in an email.

“The affects may get broader or narrower as time goes on. We’re just not sure at this stage,” Zalneraitis said. “No one is losing sight of the economics as part of the needs of our community.”

For now, attorneys general from Colorado, New Mexico, and Utah have joined together to fight for compensation for communities affected by the spill.

“We have to be vigilant as attorneys general, as the lawyers for the state, as protectors of the environment, to be sure that the assurances we received today from the Environmental Protection Agency are the same in two years, in five years, even 10 years when we discover what the damage to the environment actually is,” Colorado Attorney General Cynthia Coffman said at a press conference in Durango, Colo.

Tom Bridge has owned a nursery and landscaping business on the Animas River in Durango, Colo., for 15 years.

After the spill, Bridge immediately shut down his irrigators, which pump water from the river to his nursery. This forced Bridge to truck in thousands of gallons of clean water to keep his inventory alive.

“Our business was definitely affected,” Bridge said. “But it will have to be looked at over a longer period of time before we can get a smart assessment. Without the river, my business would not exist.”

On Wednesday, EPA Administrator Gina McCarthy visited Durango and the Animas River region, accepting the agency’s “full responsibility” and promising to return the town back to “normal.”

“No agency could be more upset about the incident happening or more dedicated about doing our job and getting this right,” McCarthy said.

'We are coordinated & unified w/ local ppl and state. We will get #AnimasRiver and towns back to normal" – @GinaEPA pic.twitter.com/IbifyxYVVp

Kay James, an organic ranch owner in Durango, Colo., who works 10 miles away from the river, was able to avoid the spill because the EPA gave her adequate notice to obtain water from other sources.

However, James told The Daily Signal the national attention to the incident could have a long-term impact on the area’s tourism industry.

“The impact it might have long-term is on the attitudes of people as far as tourism goes,” James said. “The more it is sensationalized, the more innocent people are going to take on that fear, and that’s what we don’t want to see happen.”

“Current lodging and future reservations are holding steady and we remain optimistic,” Kunkel told The Daily Signal. “This was an interesting incident in that it occurred up river, it passed through like a train, and it moved on. The river is back to pre-event conditions, but obviously testing for damage to ecosystems will go on for months.”

Despite the river returning back to its normal appearance, local authorities are waiting on the EPA to test the water and determine if the river is safe for human activities.

Bridge doesn’t want to wait on anyone.

He plans to send his own water and soil samples to Colorado State University for testing.

“There are long-term environmental issues that have to be monitored,” Bridge said. “I am someone that believes in trust, but verify.”