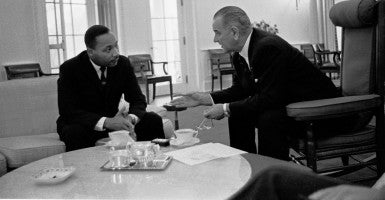 There is no question that we can and should celebrate the 50th anniversary of the Voting Rights Act (VRA), which is one of the most successful—and important—laws ever passed by Congress.

It may be one of the few statutes passed by Congress that has fully achieved its objective: it has enfranchised millions of black and other Americans who had been wrongly denied their right to vote, and it stopped the widespread, systematic, official discrimination being practiced by state and local governments in the Jim Crow South.

What is sad, however, are the scare tactics being used by opponents of the U.S. Supreme Court’s decision in one case in 2013, Shelby County v. Holder, to assert that “almost all of the protections in the Voting Rights Act” have been “systematically dismantled” and that the right to vote has been taken away.

Nothing could be farther from the truth, and nothing could be more shameful than the incendiary racial demagoguery being used to push this mistaken idea and to politicize the celebration of the Voting Rights Act.

The Success of the Voting Rights Act

The overwhelming success of the Voting Rights Act is self-evident. Discrimination was so bad in 1965 that the voter registration rate for black Americans in states like Georgia and Mississippi was only 27 and 7 percent, respectively, while more than 60 percent of whites were registered in both states.

But in 2004, the year before Congress considered the renewal of one small provision of the Act, black registration rates exceeded white registration rates in Georgia and Mississippi, and the voting rates of black Americans exceeded that of whites in many other states. In fact, blacks voted at a higher rate than whites in the 2012 election by two percentage points, according to the U.S. Census Bureau.

No one can rationally claim that there is still widespread, official discrimination in the Southern states of the former Confederacy that were the initial target of the Voting Rights Act, or in any other parts of the country, for that matter.

If Right to Vote Was Threatened, Justice Department Would Do More

This is also confirmed by another fact that is in complete contrast with the claims made by President Barack Obama that the “right to vote is threatened today” or, as he said in his 2015 State of the Union address, that the right to vote is “being denied to too many on this 50th anniversary.”

Obama and his political appointees, Eric Holder and Loretta Lynch, have had complete control of the U.S. Justice Department for the past six and a half years. Yet in all that time, the Civil Rights Division of the Justice Department has filed only four lawsuits under Section 2 of the Voting Rights Act.  Section 2 is the permanent, nationwide provision that prohibits racial discrimination in the voting process.

But today, actual voting discrimination is so rare that the Justice Department, which does not lack for resources and lawyers, has filed less than a handful of lawsuits claiming such discrimination.

When the Justice Department does file suit, Section 2 as well as other parts of the Voting Rights Act remain powerful tools to stop discrimination. The Justice Department has filed even fewer suits under Section 11b of the VRA, for instance, which prohibits threats, intimidation and coercion in the voting context. There have been no lawsuits filed by the Obama administration under 11b. Absolutely none.

The claim that the Voting Rights Act has been “gutted” by the Shelby County decision is simply specious. The Voting Rights Act has numerous permanent, nationwide provisions that protect all voters from racial discrimination, including Sections 2 and 11b. At issue in Shelby County was the outdated Section 5 of the VRA that was intended to be a temporary, 5-year emergency provision. It placed the worst states like Georgia and Mississippi, where black voter registration and turnout rates were below 50 percent, in federal receivership: they could not make any change in their voting laws without getting the pre-approval of the federal government.

But as the Supreme Court said in Shelby County, “history did not end in 1965.” Congress refused to update the 50 percent coverage formula in 2006 when it renewed Section 5 for another 25 years. If it had, not a single one of the nine states covered under Section 5 would have remained covered, because as the Court said, “voter turnout and registration rates [of black and white voters] now approach parity. Blatantly discriminatory evasions of federal decrees are rare. And minority candidates hold office at unprecedented levels.”

Instead, Section 5 had become a tool to ensure racially gerrymandered and segregated voting districts, which is flatly at odds with goals of the Voting Rights Act. The Court concluded that the coverage formula for Section 5 was unconstitutional because Congress did not update it to reflect current conditions—conditions that prove that Americans of all colors are fully enfranchised today and that none of the formerly covered states still need special supervision.

Voter ID Laws Are Not a Problem

Instead, as Jonathan Tobin of Commentary says, Obama and other members of his political party have invented “a mythical war on voting rights.” They use commonsense voter ID laws as a focal point for these claims—despite the fact that polls consistently show that a majority of Americans of all colors support voter ID.

Turnout in elections in states that have had voter ID laws in place for years show that all of the claims that they “suppress” the vote of minorities or keep anyone from voting are completely false. As Tobin points out, “efforts to single out blacks and prevent them from voting simply do not exist anywhere in the nation.”

So let’s celebrate the achievement of something that was just a distant dream in 1965: that in 2015, all Americans have the ability to easily register and vote without threats, intimidation or fear.

What we should be concentrating on, instead of imaginary claims of disenfranchisement, is convincing those Americans who don’t vote because they are disappointed with the political process that they need to get involved. Voting is not just a right; it is a privilege. And there are many other people around the world who envy the ability of Americans to take advantage of that privilege.