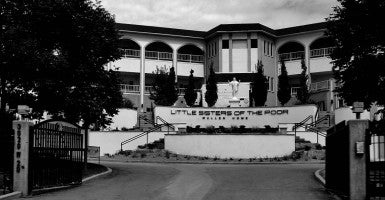 The Obama administration continues its persistent attack on the Little Sisters of the Poor following their challenge to the Obamacare abortion drug mandate.

Earlier this summer, the 10th U.S. Circuit Court of Appeals ruled against the Little Sisters in their challenge to the Affordable Care Act requirement that they provide employees with health care coverage that includes contraceptives, sterilization, and abortion-inducing drugs and devices, or
fill out a form notifying the Department of Health and Human Services of their religious objection to providing such coverage.

The Obama administration considers this second option as accommodating the Little Sisters’ religious beliefs because the notification initiates the process of insurers and third-party administrators providing the mandated coverage at no cost to the insured.

The Little Sisters, however, maintain that this so-called accommodation does no such thing.

Filling out the form does not insulate them from complicity in the facilitation of potentially life-ending drugs and devices, and that substantially burdens their free exercise of religion.

Noel Francisco and Paul Pohl, counsel for other nonprofit religious employers that are challenging the accommodation, aptly noted that this “does not accommodate the plaintiffs’ religious beliefs at all” because it “still forces [the religious employers] to hire and maintain a contract with an insurance company that will provide the objectionable … Maintaining this relationship is exactly what the plaintiffs find religiously objectionable.”

As Francisco and Pohl analogize:

Imagine that you hire a piano tutor for your children and learn that the tutor is supplying them with free cigarettes. You might object to maintaining the arrangement, regardless of whether you are paying for the cigarettes. Or imagine you have a religious objection to alcohol and learn that the caterer you have hired for your wedding is going to serve free booze to all of your wedding guests. You might want to fire the caterer.

It’s worth mentioning two other alternatives available to the Little Sisters: drop their health insurance or pay crushing fines of up to $100 per employee per day.

The 10th Circuit panel agreed with the Obama administration, finding that the accommodation “relieves [the Little Sisters] of their statutory obligation” to provide the objectionable coverage.

The panel wrote that the Little Sisters are wrong about the legal effect of filling out this form because “[f]ederal law, not the form or notification of HHS, provides contraceptive coverage.”

Linda Greenhouse opined in the New York Times that the Little Sisters’ claims are “anachronistic and politically driven” and “a case too far.”

Greenhouse asserts that the “administration has bent over backward to accommodate religious claims.” But this misses the heart of the Little Sisters’ objection.

Though the government may believe its accommodation is sufficient to distance religious employers from acts they find morally objectionable, the Little Sisters (and many others) clearly do not agree.

As the Little Sisters explained in a brief filed with the 10th Circuit, the accommodation “merely offers [them] another way to violate their religion.”

The 10th Circuit panel declared that the Little Sister’s “religious objection cannot hamstring government efforts to ensure that plan participants and beneficiaries receive the coverage to which they are entitled.”

But employees may obtain contraception in numerous ways without forcing the involvement of the Little Sisters’ healthcare plan.

As Justice Samuel Alito noted in the majority opinion in Burwell v. Hobby Lobby, the government could provide or pay for these drugs and devices itself, while allowing the Little Sisters and other non-profits to obey their conscience.

The Little Sisters last week filed a cert. petition asking the Supreme Court to review their case, one of six accommodation cases pending before the Court.

Let’s hope the justices agree to hear one of these cases next term—and that one branch of government takes the right of conscience seriously.