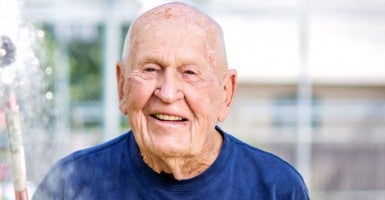 The Fountain of Youth may just be sitting in a Winfield, Kansas Walmart.

It’s there that Loren Wade, a Walmart employee since 1983, celebrated his 103rd birthday on Saturday. The Kansas native—who still puts in five-day, 30-hour work weeks—was joined by 200 of his closest family and friends for a daylong outdoor celebration.

The party included a congratulatory phone call from 92-year-old Bob Dole, who told Wade he may “catch [him] one of these days.” Wade’s son, now in his 80s, was also at the party.

“The company seems to like me and I appreciate it so much that they still let me work,” Wade told a local FOX affiliate in Winfield. “They are so good to me. It’s a great company.”

Wade found his job at Walmart after retiring at age 70. He found retirement “pretty boring,” and he applied to work for the retail giant to help keep busy. Having taken his first job in Winfield at age 12, he has now been in the American workforce for more than 90 years.

Wade is a store “fixture,” according to locals, watering plants, greeting customers and running the cash register.

“I like to meet people and, being here, I get to talk to a lot of people,” Wade told TODAY’s Sheinelle Jones. “I like being occupied. I usually keep very busy, one thing or another. They see to it that I do.”

Wade is no stranger to hard work, having spent time in the Air Force during World War II. He was stationed for 43 months in India and China.

After World War II, Wade owned his own flooring business, where he laid carpet, sanded floors, and installed ceramic tile. He then held a couple of jobs with the United States Postal Service prior to retiring.

“You come to work and there is this role model that everyone is amazed by,” store manager Tonya Villar told KWCH-TV. “He works in lawn and garden, gives his all, he never misses work. He really is an inspiration to everyone.”

In honor of Wade’s birthday and service in World War II, Walmart is donating $125,000 to the Friends of the National World War II Memorial.

It’s not the first time he has been honored. In 2012, Experience Works, a job-training non-profit for older workers, awarded Wade with the title of “America’s Outstanding Oldest Worker.”

Wade credits his job at Walmart for keeping him active and healthy.

“I appreciate getting to be old and being recognized,” Wade told TODAY. “But like I say I’m still just a normal human being. I just happen to be lucky enough to still be around.”