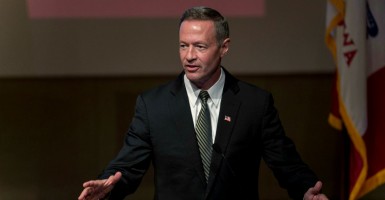 “Together we have to choose to make a more inclusive economy that works for all of our people,” O’Malley said.

The Caucus Candidate Series has offered all presidential and potential candidates from both political parties to speak in the coming months gearing up for the Iowa Caucuses. The forum style allowed many audience members to ask questions that O’Malley answered.

.@MartinOMalley in Des Moines: “Progress is a choice.” #iacaucus pic.twitter.com/qG08q03Nn6

“Progress is a choice,” O’Malley stated.

“Wherever you start in life, you should be able to get ahead.”

He would like to invest more in education and have the fourth year of high school reformed, pushing for more technical and professional education during that year for students.

O’Malley opposes the Trans-Pacific Partnership trade deal because he wants America to be stronger at home. He believes the deal makes it easier for some multi-national corporations to offshore profits and offshore jobs.

He said that this may boost the bottom line of the corporations but it does not improve the economy for the country.

According to O’Malley, trade deals that raise standards for workers and the environment are “good” for the country.

The Affordable Care Act supporter says with more people covered by health care, the “escalating” costs are brought down by improved wellness and the coordination of care. He feels the health care act is a “major step forward” for the country.

Praising Iowa for the state’s use of wind energy, O’Malley said opportunities such as this need to be identified. He would like a “green” design for energy for the future.

O’Malley—who has respect for hunters and hunting traditions—does not support the selling of combat weapons on the streets. He would like comprehensive gun legislation to make the country safe.

“We need to keep pushing at the national level for sensible gun safety legislation.” This would include mandatory background checks for those purchasing guns.

O’Malley said with the threat of lone wolves and terror cells in the “new age of asymmetrical warfare … The last thing in the world we want to do is create a shadow society [of illegal immigrants].”

He would also like comprehensive immigration reform to extend coverage to more people. He said the reform should be talked about “as an economic comparative.” The reform must be passed so that wages in this country can go up.

“We want people to live in the openness of American society.”