Experts: States, Not Federal Government, Should Respond to Disasters 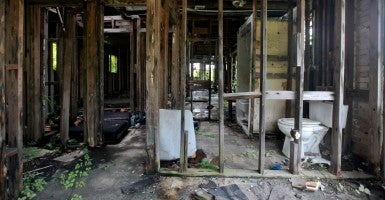 As states rely increasingly on the federal government and on the Federal Emergency Management Agency (FEMA) to come to their aid during disaster scenarios, citizens are put in a more dangerous position and are not being helped in the best manner.

This is what a panel of experts concluded during an event at The Heritage Foundation on Monday.

Daniel Kaniewski, former special assistant to the president for Homeland Security and senior director for response policy under the George W. Bush administration, explained that the American system of government was founded on the belief that disasters should be handled at the lowest level possible.

First, families and communities respond, then state governments, and eventually the federal government in extreme and catastrophic disasters.

However, with the 1988 passage of the Stafford Act, disasters are much more easily federalized, according to David Inserra, policy analyst for Homeland Security and cybersecurity at The Heritage Foundation.

The unintended consequences of the federal government helping during an increasingly large number of disasters is that the states are far less prepared to handle disaster relief for their own citizens on the local level, the panel explained.

The experts agreed that the federal government should absolutely play a role in national disasters like Hurricane Katrina but should not be called upon to solve every problem in the states.

With FEMA becoming involved with responding to more disasters on the state level, Inserra argued that this takes money away from “truly catastrophic disasters.”

Because states know that FEMA will come to their rescue, they are preparing less and setting aside less money to handle disasters, Inserra explained.

Since national disasters like hurricanes and floods are “low probability, high consequence events,” according to Kaniewski, the incentives for states to prepare to handle the catastrophic situations is already low. When the federal government spends more and more money to prepare, state and local governments have even fewer reasons to be ready.

Kaniewski reminded attendees that the federal government is not going to be a first responder to a disaster situation. Help may not arrive for hours or days, and individuals and local governments must be ready to sustain themselves, he said.

James Ross, Defense in Support of Civil Authorities Response Branch chief at the Department of Defense, agreed that states are a crucial part of disaster relief.

He argued that while the Department of Defense plays a “key role” in disaster response, the agency will always act in support of domestic civilian authorities.

In instances where the Department of Defense deploys the National Guard to states, it is the local governors who are ultimately responsible for this response.

“No matter how much the federal government prepares for the next disaster, it’s really not relevant,” Kaniewski said.

What is relevant, he explained, is how individuals prepare their own families and communities.

“With each level of government better prepared for a disaster, the U.S. will be in a better position to handle whatever comes its way, this hurricane season and beyond,” Inserra said.