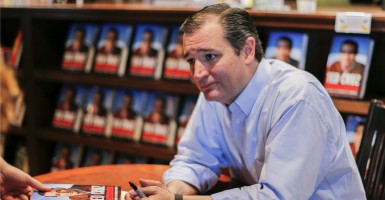 Sen. Ted Cruz of Texas after signing a copy of his book, "A Time for Truth" in Woodstock, Georgia. (Photo: ERIK S. LESSER/EPA/Newscom)

The New York Times has refused to include a book written by Sen. Ted Cruz on its bestseller list.

Cruz, R-Texas, who is a 2016 presidential candidate, published his book, “A Time for Truth,” on June 30. On Thursday, Politico reported that the book “sold 11,854 copies in its first week:”

That’s more than 18 of the 20 titles that will appear on the bestseller list for the week ending July 4. Aziz Ansari’s “Modern Romance,” which is #2 on the list, sold fewer than 10,000 copies. Ann Coulter’s “Adios, America,” at #11, sold just over half as many copies.

Cruz’s book should have qualified to be in third place on the list of hardcover nonfiction, but “A Time for Truth” is absent from The New York Times Bestseller list for the week of July 5.

“In the case of this book, the overwhelming preponderance of evidence was that sales were limited to strategic bulk purchases,” a spokesperson for The New York Times told Politico.

Authors, publishers or marketing firms will sometimes organize bulk purchases of books, allowing the title to climb the bestseller lists, only to return the books at a later date. Many media outlets who rank book sales, including The New York Times, attempt to omit these purchases from their rankings.

But Cruz’s campaign and the publisher of his book refuted The New York Times’ claim that the sales of the book are not authentic.

The New York Times is lying — they should release their evidence or issue a formal apology https://t.co/CMqlbrkysS pic.twitter.com/K3mQhmNsqf

In a statement to BuzzFeed News, HarperCollins publicity director Tina Andreadis said that the publisher “has investigated the sales pattern for Ted Cruz’s book” and “found no evidence of bulk orders or sales through any retailer or organization”:

A TIME FOR TRUTH ranked high on other publishing industry bestseller lists including Nielsen Bookscan, a subscription service that tracks the vast majority of book sales in America, The Wall Street Journal and Barnes and Noble. All these outlets omit bulk orders books from their rankings.

In a statement, the Cruz campaign said that The New York Times “is lying.”

Cruz campaign spokesperson Rick Tyler said in the statement that the claim “is a blatant falsehood.”

“The evidence is directly to the contrary. In leveling this false charge, the Times has tried to impugn the integrity of Senator Cruz and of his publisher HarperCollins,” Tyler said.

The campaign added that Cruz has attracted large crowds to all of his book signing events.

“As of yesterday, ‘A Time for Truth’ was the number 13 bestselling book, and there is no evidence of unusual bulk purchase activity in our sales data,” Sarah Gelman, Amazon’s director of press relations, told Politico.