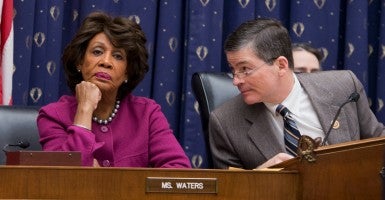 A hearing called by Republicans to address “serious and troubling” instances of racial, gender and age discrimination at the Consumer Financial Protection Bureau turned ugly today when Democrats accused Republicans of using the issue to “continue their attack on the bureau.”

“The opposite side of the aisle hates the Consumer Financial Protection Bureau,” said Rep. Maxine Waters, D-Calif., the committee’s ranking member. “They would like to destroy it. We have to take pause when it appears that [Republicans] would simply like to use discrimination as a way by which they continue to attack the bureau.”

At least one Republican called out his Democrat colleague for insinuating the motivation behind the decision to hold the hearing was racist.

“It’s not fair to accuse other members of this committee as [being] racists,” said Rep. Bruce Poliquin, R-Maine.

“It’s not fair to accuse other members of this committee as [being] racists,” said @RepPoliquin.

Members were clearly “personally offended” by the congresswoman’s comments, looking at one another in disbelief. Some even attempted to interrupt Waters as she spoke, physically displaying their discontent.

The CFPB was created as part of Dodd-Frank in 2010. It is tasked with setting up regulatory guidance for a wide range of financial products and is often subject to criticism from Republicans for creating burdensome regulations.

One of the bureau’s core functions is to “enforce laws that outlaw discrimination and other unfair treatment in consumer finance.”

Republicans on the Financial Services Committee were quick to point out the irony of the situation, given the agency’s anti-discrimination mission.

“How can the CFPB address racial discrimination in banks if they have the same problem?” asked Rep. Mick Mulvaney, R-S.C.

Two CFPB employees were called to testify before Congress about how the situation, in their opinions, has become worse.

“It is disheartening that after three congressional hearings and nearly two years of my attempts to address these issues internally that no appreciable progress has been made,” said Florine Williams, a senior civil rights official at the bureau.

Williams said the agency’s director, Richard Cordray, doesn’t take these allegations seriously, and that complaints are tossed between agency employees “like a hot potato.”

Williams has more than 20 years of experience working at federal agencies, including the Department of Defense, Department of Housing and Urban Development and the U.S. Postal Service as an equal employment official.

Of the abuses occurring inside CFPB, she said, “I’ve never seen anything like this in my life.”

Yet during the hearing, Williams’ testimony—along with that of another colleague—was undermined by committee members who spent more time fighting with each other than listening to the witnesses’ accounts.

Led by Rep. Al Green of Texas, Democrats accused Republicans of caring only about these allegations of discrimination out of convenience, calling his colleagues on the other side of the aisle, “part-time freedom fighters.” Green also criticized Republicans for not holding a single hearing on discrimination in the mortgage lending industry, and said their decision to hold today’s hearing was “akin to the way we dealt with the Confederate flag.”

Waters, speaking directly to the two witnesses, went so far as to suggest that Republican members of the committee cared less than Democrats about the alleged discrimination because the majority who were in the room were white.

Do you think that the majority of the members on the opposite side of the aisle are more concerned about discrimination than this side of the aisle? Just take a look for yourself. When you come here [to testify], you have to know that your issue gets all mixed up in the politics of this committee.

Rep. Jeb Hensarling, R-Texas, who chairs the full committee, called the congresswoman’s allegation, “beyond the pale.”

“Frankly, I found the comments to be outrageous,” he said. “I know that the ranking member has a very good vision, but I did not know that she could look into the hearts of her colleagues. And to question the motivation of the committee, frankly, is beyond the pale.” Rep. Jeb Hensarling, R-Texas, defends his committee’s decision to hold a hearing on an alleged culture of discrimination within the CFPB. (Photo: Bill Clark/CQ Roll Call)

Holding up a stack of paper four inches thick of discrimination complaints by CFPB employees, Hensarling vowed to continue investigating the alleged culture of discrimination and retaliation within the bureau, saying “we would be derelict of our duty if we didn’t hold these hearings.”

“The minority of this committee wishes to turn a blind eye when we see discrimination in government,” he said. “We will not allow the Democrat side of the aisle to change the subject.”