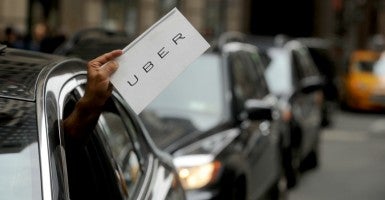 The latest battle occurred this week after the California Labor Commissioner’s Office decided that Barbara Berwick, a driver for Uber, should be defined as an employee of the company, not an independent contractor.

Though the ruling applied to a single driver for the ride-sharing service, the reclassification lays the groundwork for greater regulation.

“This ruling—if it stands—could force Uber out of California,” said James Sherk, a senior policy analyst in labor economics at The Heritage Foundation. “Uber drivers use their own vehicles, set their own hours and are free to work for competitors like Lyft at the same time. Under federal law that makes them independent contractors.”

Uber has appealed the ruling, hoping to win against California as it has in five other states that attempted to reclassify the company’s drivers as employees. But California state law explicitly states employers must reimburse employees for businesses-related expenses, setting it apart from previous lawsuits.

“It destroys Uber’s business model,” Sherk said. “I would expect them to leave California rather than comply.”

He said the reclassification would “massively” increase the cost to Uber. It could also transform the entire sharing economy, which brings together freelance workers who provide a product, such as a ride, to customers through a digital platform. Airbnb, Lyft and GrubHub are all part of this growing sector.

Regulation such as California’s would affect an estimated 2 million to 3 million people who work for companies in the sharing economy, according to the LA Times.