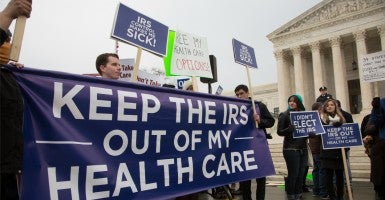 As Republican lawmakers brace for the U.S. Supreme Court’s King v. Burwell decision, a conservative plan has emerged that would eliminate the subsidies awarded under the Affordable Care Act, popularly known as Obamacare.

In anticipation of the King v. Burwell decision, Rep. Paul Gosar, R-Ariz., introduced the Premium Reduction and Insurance Market Reform Act. The bill would end Obamacare’s subsidies and eliminate the law’s age rating restrictions, benefit mandates and minimum actuarial value requirement—addressing the issue if the Supreme Court rules against the Obama administration. A decision could come as early as Monday.

However, the administration extended the tax credits to include the remaining 34 states using the federal exchange, HealthCare.gov.

If the court rules against the Obama administration, striking down federal subsidies, Republicans are expected to roll out a response to the decision that would still provide a safety net for the approximately 6.4 million Americans at risk of losing their tax credits.

In the Senate, Republicans are discussing options that include extending Obamacare’s subsidies through 2017.

“We’re going to be prepared,” Sen. Orrin Hatch, R-Utah, told Politico. “We wouldn’t call them subsidies. But we’d certainly keep people whole so that they wouldn’t suffer because of this interim time.”

Though GOP senators appear to be uniting behind a plan that extends subsidies to those living in states on the federal exchange, conservatives like Gosar are pushing for the elimination of them.

In a statement, Michael Needham, chief executive of Heritage Action for America, praised Gosar’s legislation for getting rid of the subsidies. The group touted the plan as the “conservative” response to King v. Burwell.

“A continuation of illegal subsidies will simply cover up the law’s costs while giving the impression Republicans believe subsidies are necessary for Americans to afford health insurance,” he said.