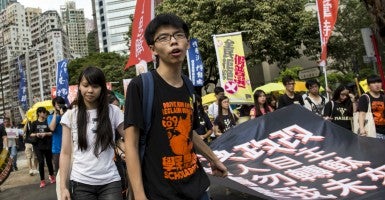 The people of Hong Kong have once again given the world a lesson in democracy and liberty, this time by rejecting a bogus election plan hatched by communists in the People’s Republic of China. This is the gist of confusing events that took place Thursday in the former British colony.

Lawmakers in the mini-legislature, the Legislative Council, stood up for the principle of democracy by voting down a plan on how to elect the city’s next leader, or chief executive, in 2017. What makes it confusing is that it was pro-democracy legislators who killed the plan and Beijing says it wants “universal suffrage.”

Here’s rub: Beijing’s plan would indeed have allowed people in Hong Kong to vote, but only for candidates selected beforehand by a committee of 1,200 that does Beijing’s bidding. Candidates who do not toe Beijing’s line need not apply.

As The New York Times put it in an overnight dispatch, “Beijing has made it clear that it will not allow anyone who does not ‘love China’—that is, a China under Communist Party rule—to appear on the ballot.”

So it was left to the pro-democracy faction in the LegCo, the pan-democratic alliance, to vote down the measure. It went down with 28 votes against and only eight in favor, as confusion among the pro-Beijing camp left many legislators not voting.

China and its supporters in Hong Kong will continue to try to confuse the world. The pro-Beijing current chief executive of Hong Kong, CY Leung, said for example that lawmakers who voted no were “denying give million eligible voters the right to elect the chief executive.”

As for the People’s Republic of China, its rubber-stamp legislature in Beijing put out a statement which read: “Although the universal suffrage motion was not passed at the Legislative Council, the direction towards universal suffrage and the legal principles laid down in the decision of the National People’s Congress (NPC) Standing Committee, must continue to be upheld in future efforts to pursue universal suffrage.” Translation: Our plan for controlling the outcome of a vote is the only thing available.

Leave it to the charismatic 18-year-old leader of last year’s pro-democracy demonstrations, Joshua Wong, to clarify matters. “We have defeated a bogus voting plan,” he said, “but we will have to shift from playing defense to playing offense to get the election that we desire.”

The U.S. senate can help Wong and other democrats in Hong Kong by re-introducing the Hong Kong Human Rights and Democracy Act, which would require the president to certify that Hong Kong is indeed autonomous before exempting it from any new law or agreement applicable to the People’s Republic of China.

The act, whose House version was introduced back in February, also reinstates the State Department’s annual reports on Hong Kong, which lapsed in 2007 on a parliamentary technicality. Its sponsor, Sen. Marco Rubio, R-Fla., made clear the act’s intention when he said last year “the U.S. should make clear that we stand on the side of the democratic aspirations of the people of Hong Kong and against attempts to suppress their voices.”