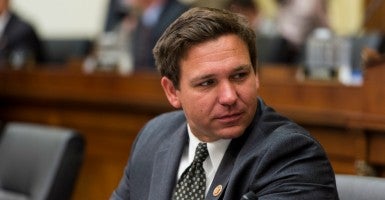 Top government officials were called before Congress today to answer a series of questions about illegal immigration enforcement since President Obama announced his plan to grant legal status to millions here illegally.

Obama’s executive actions on immigration—introduced in November—are currently on hold due to a federal court ruling.

“President Obama made far-reaching, unilateral changes to our nation’s immigration policy despite saying on over 22 different occasions that he did not have the authority to do so,” said Rep. Ron DeSantis, R-Fla., in his opening remarks.

DeSantis, the chairman of the House Committee on Oversight and Government Reform’s Subcommittee on National Security, referenced a recent U.S. Immigrations and Customs Enforcement report.

The report showed that between fiscal year 2010 and fiscal year 2014, 121 convicted criminals in the country illegally were charged with homicide following their release from custody.

“The administration failed to remove these criminals from the United States,” DeSantis said.

DeSantis, who co-chaired the hearing with Rep. Jim Jordan, R-Ohio, added that in fiscal year 2013, ICE released 36,007 convicted criminals from its custody.

DeSantis believes the president’s policy changes—despite them not being implemented yet—have hampered the administration’s ability to enforce immigration laws.

“Simply put, the president’s policy changes are not doing a good job of protecting the safety of the American people,” DeSantis said.

Sarah Saldaña, the director of U.S. Immigration and Customs Enforcement, reassured lawmakers that enforcing the nation’s immigration laws remains one of her department’s “primary goals.”

“[Department of Homeland Security] Secretary [Jeh] Johnson has made it clear to all of us that our borders are not open to illegal migration, and that I should allocate enforcement resources accordingly, consistent with our laws and with our values,” she said.

León Rodríguez, the director of U.S. Citizenship and Immigration Services, said that he believes in the “legality” of the president’s executive actions, and that the program will be “vindicated” by the legal system.

Rodríguez added that the president’s action could be “stopped immediately” in the face of a “legislative solution” from Congress.

Protesters chanting “not one more deportation” briefly interrupted the hearing and were escorted out of the premises.