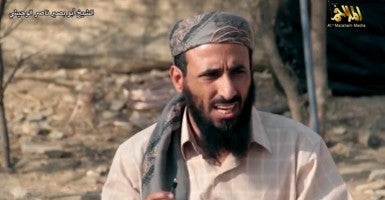 Al Qaeda's second in command Nasier al-Wuhayshi said he would attack the U.S. in a video released March 2014. (Photo: Polaris/Newscom)

Al-Wuhayshi also commanded the terrorist group’s Yemen affiliate, al-Qaeda in the Arabian Peninsula (AQAP), the deadliest branch of the global network according to U.S. officials. The group said in a video statement two operatives were additionally killed.

Steve Bucci, director of The Heritage Foundation’s Allison Center for Foreign Policy Studies, said the killing of Wuhayshi is a “positive development, but not a game changer.”

“Al-Qaeda will adjust and move to a new leader,” he said. “The U.S. needs to take care not to make too much of this.”

“Let it be known to the enemies of God that their battle is not only with one person or figure, no matter how important,” senior al-Qaeda leader Khaled Batarfi said in the statement. “To the infidel America: God has kept alive those who will trouble your life and make you taste the bitterness of defeat.”

“The elimination of another al-Qaeda leader should be applauded, but everyone must remember, the president most of all, that drone strikes against leaders alone cannot win this war,” Bucci said. “It is a good tool, but not a panacea.”

James Carafano, vice president of The Heritage Foundation’s Foreign and Defense Policy Studies, elaborated that drone strikes alone are not enough. He said since 2010 drone strikes have served as the focus of Obama’s counterterrorism strategy, yet today the transnational terrorist threat is “greater than ever.”

“Taking out one terrorist at a time won’t win this war,” Carafano said.

Al-Wuhayshi was an associate of bin Laden’s leading up to the Sept. 11 attacks and led AQAP’s unsuccessful attempt to blow up airliners over the U.S. He also claimed responsibility for the massacre at French satirical newspaper Charlie Hebdo earlier this year.

The group has also expanded in recent months, feeding off the chaos of Yemen’s civil war to capture territory and exploit the power vacuum left by the central government’s collapse. In April, the group captured Yemen’s fifth-largest city, Mukalla, reportedly seizing millions of dollars from the central bank along with an airport and an oil terminal.