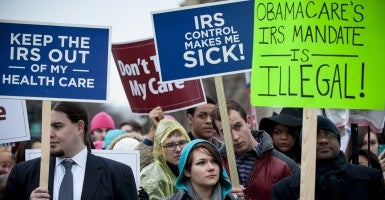 Activists demonstrate in front of the Supreme Court on March 4, 2015, as the Justices heard oral arguments in the King v. Burwell case that challenges the section of Obamacare. (Photo: Pete Marovich/UPI/Newscom)

Every day there seems to be another article focused on how many individuals might lose their subsidies if the Supreme Court rules in favor of the plaintiffs in the King v. Burwell case.

Yet, an even bigger group of individuals harmed by Obamacare has an equally good claim for relief that hasn’t gotten as much attention—the people who, thanks to Obamacare, must pay more for health insurance but who never got subsidies.

The Obamacare subsidies were intended, in part, to hide the law’s unpopular effects. At their root, Obamacare’s costly regulations, dictating what insurers can sell and what individuals and employers can buy, have resulted in premium costs going up, not down. In the 34 states potentially affected by the Court’s ruling, those regulations have driven up costs not only for the estimated 6.4 million receiving coverage subsidies, but also for at least another 15 million who have been forced to pay more for their health insurance without getting any subsidy.

Last month, The Heritage Foundation published a report highlighting that on average premiums could decrease by as much as 44 percent for young adults and 7 percent for near retirees if Congress, in response to a ruling in favor of the plaintiffs in King v Burwell, simply eliminate three of the most costly Obamacare regulations—the age-rating rules, the actuarial value restrictions and the benefit mandates—in the affected states.

Congress’ first step in responding to the Court’s ruling should be to get rid of the Obamacare regulations that needlessly increased the cost of coverage for both those with and without subsidies.