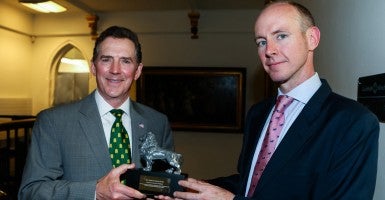 The Alliance of European Conservatives and Reformists consists of members of the European Parliament who oppose the centralized power of the European Union; they favor “the exercise of power at the lowest practicable level—by the individual where possible, by local or national authorities in preference to supranational bodies.” On May 22, Heritage Foundation President Jim DeMint received the group’s inaugural Edmund Burke Award. The following is a transcript of his remarks.

Thank you, ladies and gentlemen. It is a great honor to receive this award tonight, and twice an honor to be its first recipient.

Though we have representatives of many nations here today, I would like to begin by thanking our English hosts, and congratulating them on their recent conservative election victories …

The great English thinker G.K. Chesterton said he discovered the favorite game of the human race. He described the game (and I’m quoting) as “‘Keep to-morrow dark,’ which is also named ‘Cheat the Prophet.’ The players listen very carefully and respectfully to all that the clever men have to say about what is to happen in the next generation. The players then wait until all the clever men are dead, and bury them nicely. They then go and do something else. That is all. For a race of simple tastes, however, it is great fun.”

Well … as they proved two weeks ago, much to the embarrassment of all the “clever men,” Britons have not tired of this game yet.

And thank goodness for that.

As one who has made many enemies in Washington by proving wrong some of America’s most clever political men and women, I salute my British and European colleagues here tonight for standing together against the clever men who are leading the global march toward centralized power.

It has been noted by this Alliance that there is a deficit of democracy within the European Union … I would hasten to add that the same is increasingly true in the United States.

Too often a deficit of democracy goes hand in hand with a surplus of bureaucracy.

Sometimes our national leaders forget that oppression doesn’t always look like George Orwell’s “1984.” In the real world, it often looks more like Terry Gilliam’s “Brazil.” Orwell’s predictions of Rat-cages and thought control have been replaced by something akin to Gilliam’s absurdist nightmare of red tape, bureaucracy, and mediocrity.

The European Union was founded with a noble goal: to ensure peace, freedom, friendship, and shared prosperity between the inhabitants of the continent and their neighbors. The same sentiments were expressed in similar words in the preamble to America’s Constitution.

I’m sure there is no one here today who wishes anything less for the people of Europe or America.

But when an alliance of states or nations with such noble goals is used by zealots to impose policies abhorrent to a diverse citizenry, it becomes a source of tyranny, division and oppression. We can all live in peace and harmony with neighbors who have very different beliefs and lifestyles, unless that neighbor uses the power of a distant government to force us to conform to his beliefs and lifestyles. When the hopes, dreams and goals of individual members are superseded by a central power, that power subverts the very freedoms it was founded to protect.

And … if this same alliance is used by irresponsible, corrupt and bankrupt members to leech away hard earned wealth from the more responsible and prosperous members … it is time for conservatives and reformists to stand together for individual liberty, national sovereignty, parliamentary democracy, the rule of law, private property, low taxes, sound money, free trade, open competition, and—perhaps most importantly—the devolution of power.

There are those in Brussels who say you may keep your traditions and your civil society—as long as these are limited to trademarking a Stilton cheese. Actually, now even that can be fraught with complications.

But heaven forbid you should object to settling thousands of new people in your country—even if some of them despise everything your country stands for.

Heaven forbid you object to making your currency and markets subject to the actions of foreign bankers and failing states.

Perhaps worst of all, when nations allow political and economic power to concentrate away from the smaller actors in society it breeds resentment instead of promoting unity.

Edmund Burke, in whose spirit we gather here, recognized the importance of subsidiarity to national and international harmony. He wrote:

To be attached to the subdivision, to love the little platoon we belong to in society, is the first principle—the germ, as it were—of public affections. It is the first link in the series by which we proceed towards a love to our country, and to mankind.

Burke’s “little platoons” were the inspiration of my recent book, “Falling in Love with America Again.” The main theme of the book was that America and all free countries can only be built from the ground up by millions of people making their own decisions about what they value and how they live their lives. This is the only way a diverse people can live together in harmony. An overbearing central government makes it very difficult for the little platoons of individuals, families, churches, voluntary organizations and communities to create the opportunities and freedoms we expect from a free society.

No top-down control can force goodwill, but it is very likely to destroy it. True patriotism and brotherhood flourishes when men and women are allowed to be masters of their own spheres.

It is a cruel irony that any authority, with the pretense of celebrating diverse cultures, demands they all fit the same mold.

I have been saddened to see this trend in the United States.

Americans live under an administration that runs roughshod over their rights and traditions, and accuses those who stand against it of being bigots, or clinging bitterly to guns and religion … Two things, I might add, that our Constitution gave us every encouragement to cling, so that a demagogue could not take more power for himself.

Far from being unified, top-down policies have divided my countrymen further than ever—whether by race, riches, or faith.

But there are many who are fighting back, who are rebuilding the “little platoons” of society—their communities, churches, and local governments—working toward prosperity, self-sufficiency, and independence.

They do not hate their country because of those in power. They love her in spite of them.

And let there be no mistake: Critics of the European Union do not disdain their fellow Europeans. On the contrary, they love their neighbors enough to let them manage their own business without interference.

They understand that there is more power and freedom in independent nations living together in harmony than many nations losing their identities by dissolving into a conglomerate.

To separate citizens from the institutions which have power over them—to keep a people at arm’s length from self-determination—is not merely impractical. It is immoral.

As is elegantly stated in the Reykjavík Declaration, your Alliance exists to defend against such things, and therefore your mission is more than political. It is a moral obligation and a righteous cause.

And though the Heritage Foundation lies on different shores, we fight in common cause with all of you here tonight.

So that a future, freely chosen, may find all our nations thriving in liberty, prosperity, and friendship. Thank you.