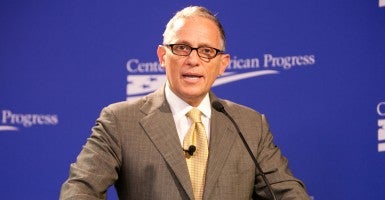 With today’s news that the 170-member Republican Study Committee is opposed to reauthorization of the Export-Import Bank, the House appears poised to allow the troubled agency to finally expire on June 30 without taking any action.

That, however, hasn’t stopped proponents of the bank from staking their hopes on the Senate’s taking action to jam the House. Fortunately, that path seems to be increasingly difficult to walk.

While it is conventional wisdom to believe the Senate can “jam the House,” the reality is that doing so is extremely difficult. There are two general scenarios in which Senate action could spur House action, but those situations are unlikely to materialize into significant threats.

The first is a standalone reauthorization. Although Senate Majority Leader Mitch McConnell would prefer to see the bank expire, he suggested he would not prevent senators from voting on a reauthorization.

Assuming a standalone reauthorization could clear procedural hurdles and pass the Senate, a standalone bill would not jam the House in any meaningful way. The House Rules Committee could either refuse to bring the bill to the floor or simply refer it to the committee of jurisdiction, which would be Financial Services.

Both approaches would be consistent with House Speaker John Boehner’s “support [for] any plan that the chairman [of Financial Services] can get through his committee.”

A discharge petition could theoretically be used to dislodge the Senate-passed bill from the committee, but the maneuver has only succeeded twice in recent history: a gun bill in the 1986 and McCain-Feingold in 2002.

For a Senate-passed standalone reauthorization to make it to the House floor, Boehner would have to go back on his word, intentionally circumventing the Financial Services Committee and going against the House majority leader, House majority whip and eight House committee chairmen.

The second is attaching it to “must pass” legislation. This is the more likely scenario that proponents would use—an attempt to include reauthorization language to legislation like they did last fall.

There are two primary ways reauthorizing language could be attached to “must pass” legislation in the Senate, but both hinge on active participation from and consent by McConnell.

There is little reason to believe the Senate will jam the House on a reauthorization or extension of the Export-Import Bank.

As Senate Majority Whip John Cornyn explained earlier this month regarding amendments and ending debate, “The only person who makes the decision is the leader.”

In a little over a month, the Export-Import Bank will begin winding down its operations. This presents a historic opportunity for congressional conservatives to not only end one of President Franklin Roosevelt’s creations, but to demonstrate to voters that America’s conservative party is fighting favoritism and cronyism in Washington.

As Paul Ryan said, “This is our opportunity to advance our welfare-reform agenda, which starts by getting rid of corporate welfare.”