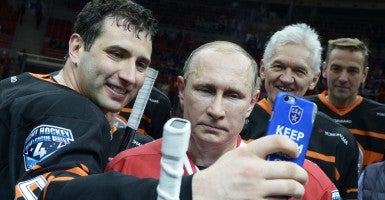 KYIV, Ukraine—Andrei Kuznetsov leans forward, clinches his angular jaw, narrows his sharp blue eyes and says: “I could tell you things that would shock Americans.”

For emphasis, the 32-year-old Russian exile then raises his eyebrows and nods as he slowly leans back in his chair and takes a sip of beer. Patrons and servers at the downtown Kyiv bar swirl around the table at which the St. Petersburg, Russia native with wavy blond hair is sitting.

“Much of Russia is being led like cattle,” Kuznetsov continues. He talks with a perpetual half-smile, using hand gestures and strategic pauses for effect like a politician making a stump speech.

“But we call ourselves ‘different Russians.’” he goes on. “Russia needs a real, tough force that can be an opposition to the Putin regime. There are people who support an opposition movement in Russia, but there is no leader to unite them.”

Kuznetsov, who has been living in Kyiv for more than nine months, has set out to create what he calls a “Russian rebel army.” He hopes to sidestep the Kremlin’s seemingly invulnerable crackdown on domestic dissent by uniting Russian dissidents living in Ukraine and across Eastern Europe, ultimately paving the way for a legitimate opposition movement to return one day to overthrow Russian President Vladimir Putin.

The Feb. 27 assassination of Russian opposition leader Boris Nemtsov in downtown Moscow was a blow to the larger Russian opposition movement, Kuznetsov says. But he also questioned Nemtsov’s credentials as a true reformer due to his close relationship with the Kremlin. “He gained some trust, but he also compromised to develop political ties,” Kuznetsov says. “The real opposition is either in jail or in the ground.”

Catching the implication of his train of thought, he adds: “Since Nemtsov is dead, maybe it means the regime thought he really was a threat.”

Kuznetsov’s journey was an accidental one, born from the tumultuous events following Ukraine’s February 2014 revolution. After Russia’s seizure of Crimea last March and the subsequent war in eastern Ukraine, Kuznetsov created a page on VK.com (the Russian-language Facebook equivalent widely used in Eastern Europe) in which he posted stories allegedly exposing Russian covert operations in Ukraine, and openly challenged the legitimacy of what he refers to as “the Putin regime.”

Despite most Russians’ reluctance to openly criticize their government, Kuznetsov’s VK page resonated. Within weeks he had more than 80,000 likes. Kuznetsov claims the Russian FSB (the successor agency of the KGB) began to harass him after his VK page became popular; he says agents interrogated him and his neighbors, and permanently parked a car outside his apartment.

The Ministry of Foreign Affairs of Russia and the Press Service of the Russian Government did not respond to requests for comment regarding Kuznetsov’s claims.

“There are people who support an opposition movement in Russia, but there is no leader to unite them.” —Andrei Kuznetsov

Kuznetsov’s VK page was eventually blocked (under Kremlin orders, he claims). But a replacement page on Facebook quickly acquired 40,000 likes.

Kuznetsov’s story reflects a crackdown on unregulated online speech in Russia dating back to 2002, which, according to the Kremlin is part of a broader anti-extremism strategy.

In August 2014 the Kremlin adopted a law regulating social media and bloggers. The law, which was passed in April 2014, included a requirement for bloggers with more 3,000 daily readers to adhere to the same regulations as mass media, including registering with the state media regulator, Roskomnadzor. The law also forbids social media users from remaining anonymous and requires social media sites to collect and store data on users.

“Bloggers are as powerful as the mass media now,” Kuznetsov says.

Another law, which went into effect Feb. 1, 2014, gives the government the ability to arbitrarily block websites. Within days the blog of anti-corruption politician Alexei Navalny, an outspoken Kremlin critic, was shut down without explanation.

Likes, retweets and shares of social media material are also regulated in Russia, and can land users in jail for up to five years, according to an anti-extremism law amendment announced June 30, 2014.

In April 2014, Putin referred to the Internet as a “CIA project.”

“Some people think if you criticize Putin, you criticize Russia,” he says. “We can talk in Russia, but it can’t lead to anything. That’s why we came here. So that we can create a movement.”

Putin enjoys an approval rating above 80 percent in Russia, but Kuznetsov claims there is an undercurrent of dissatisfaction with the Russian president that is kept in check by the government crackdowns on both traditional and social media, and Soviet-style fear and intimidation tactics. “Russians are not saying what they are thinking,” Kuznetsov says. “Most people feel the same way I do. And if someone were to unite them, we could change things.”

Countering the Kremlin’s tight grip on media is one of the biggest challenges to any Russian opposition movement. Kuznetsov pointed to Putin’s ability to spin Western sanctions in his favor as proof of his cunning propaganda strategy.

“Putin does everything to get thrown out of the international community, because when he is isolated he can do whatever he wants inside of Russia,” Kuznetsov says. “The isolation caused by the sanctions helps Putin consolidate power. He can convince Russians that everyone is the enemy.”

“The Kremlin is fighting against extremism, but they define extremism as anything against Putin,” he adds. “Going out to protest in Russia is like going to war.”

While his overall intent is political, Kuznetsov’s first objective is military. He wants to unite under one flag Russians who are fighting for Ukraine against the combined Russian-separatist forces.

“Obeying the Russian constitution is our No. 1 objective,” he says. “Our second goal is to return control of Russia to the people—we want our motherland back.”

While there are no reliable estimates of the number of Russians who have defected to and now fight for Ukraine, a spokesman for the Ukrainian National Guard Azov Regiment claimed that more than 30 of its approximately 1,400 troops are Russian defectors, comprising the largest foreign fighter contingent within Azov’s ranks, which include fighters from about 19 different countries.

The number of pro-Ukraine foreign fighters is relatively small compared with the total number of soldiers involved in the conflict. Kacper Rekawek, a Polish expert on the Ukrainian conflict, put the number at between 100 and 300 in a March 2015 report.

“The Kremlin is fighting against extremism, but they define extremism as anything against Putin. Going out to protest in Russia is like going to war.”

The primary impact of foreigners fighting for Ukraine, therefore, has not been to supplement manpower shortages, but to assist in battlefield tactics, strategic planning, and developing training programs.

Kuznetsov declined to estimate how many members he had so far recruited, but he said his group was “growing quickly” and included a recruiter stationed in Moscow. He also said the popularity of the VK page provoked a groundswell response from Russians who quietly support his mission from the online shadows.

“This army is the result of something that is in the air in Russia,” he says. “Everyone in Russia might think like me, but they are too afraid to do anything.”

Kuznetsov was initially reluctant to speak to the media. Living in perpetual fear has taken its toll, and he is careful about whom he chooses to meet in public, normally vetting new acquaintances through intermediaries such as friends or colleagues.

Joining Kuznetsov at the downtown Kyiv bar for his interview with The Daily Signal is Pavel, a 29-year-old from Moscow who had arrived in Ukraine two days prior on a flight from Turkey.

Pavel (who asked to not have his last name used due to security concerns) had never met Kuznetsov in person prior to his arrival in Ukraine. But he was frustrated by the political situation in Russia and chose to leave his life behind to have a chance, however slim, to effect change.

“In the ideas of Andrei, I saw what good might happen,” Pavel says, explaining why he left Russia. “As a protestor in Russia, I realized I couldn’t change anything.”

Also with Kuznetsov is another friend named Maksim Masur, a 25-year-old Ukrainian soldier with the Aydar Battalion. Masur, a combat veteran from battles near Luhansk and the Donetsk airport says Ukrainian soldiers welcome Russian defectors like Kuznetsov into their ranks.

“We support them and we trust them because they have no way back,” Masur said. “We don’t hate Russians. This is not a war against Russia, but a war against the regime.”

Kuznetsov’s security concerns are not unfounded—he fled St. Petersburg nine months ago due to the FSB’s alleged harassment, and he claims he’s still under their surveillance. Several recent political murders in Kyiv also have Kuznetsov nervous.

“I know that I might end up with two bullet holes in my head or in my heart,” he said.

One of the unifying ideas among the Russian defectors fighting in Ukraine is the hope that the post-Soviet generation in Russia, increasingly exposed to the West through social media, will finally shed Russia’s communist past and demand political and economic reform.

“When I was born, the Soviet Union was in its dying days,” Kuznetsov says. “We are the only generation caught between two epochs.”

“We were born in the USSR, but we left that part of history behind,” Pavel adds. “We would like to live in the civilized world.”

Kuznetsov says he has not yet been approached by the CIA or any other Western intelligence agency, but claims to be in contact with Ukraine’s SBU (the Ukrainian equivalent of the FBI). While accepting any CIA or U.S. support would play into the propaganda attacks by Kuznetsov’s detractors, he says international support is critical to his mission’s success.

“We are called CIA puppets anyway, so why not live up to our reputation?” he says. “And the truth is, we are dead without international support.”

Asked if he could ever return to Russia, Kuznetsov replies: “I definitely can’t go back, especially after I started speaking out so loudly here in Kyiv.”

He pauses, flashes another half-smile, and then adds: “The only way I’ll go back to Russia is in a NATO tank.”