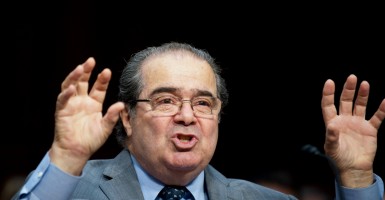 To hear Supreme Court Justice Antonin Scalia tell it, America’s freedoms don’t come from freedom of speech or freedom of the press.

It’s not the right to bear arms that keeps us free, nor is it the right to “be secure … against unreasonable search and seizure” or to a “speedy and public trial, by an impartial jury.”

The reason America’s basic freedom has endured for more than 200 years, Scalia said Friday in a speech to the Federalist Society in Morristown, N.J., is not the amendments to the Constitution but the Constitution itself.

“Every tin horn dictator in the world today, every president for life, has a Bill of Rights,” said Scalia, author of the 2012 book “Reading Law: The Interpretation of Legal Texts.” “That’s not what makes us free; if it did, you would rather live in Zimbabwe. But you wouldn’t want to live in most countries in the world that have a Bill of Rights. What has made us free is our Constitution. Think of the word ‘constitution;’ it means structure.”

That’s why America’s framers debated not the Bill of Rights during the Constitutional Convention of 1787 in Philadelphia, he said, but rather the structure of the federal government.

“The genius of the American constitutional system is the dispersal of power,” he said. “Once power is centralized in one person, or one part [of government], a Bill of Rights is just words on paper.”

Scalia said the most profound and significant departure from our nation’s constitutional structure and the principle of federalism protecting the states from federal power came in 1913, when the 17th Amendment was ratified, providing for the direct, popular election of U.S. senators. Before, state governments appointed U.S. senators.

“What a difference that makes,” Scalia said. “When you have a bill that says states will not receive federal highway funds unless they raise the drinking age to 21, that bill would not pass. The states that had lower drinking ages would tell their senators, ‘You vote for that and you are out of there.’ It took 86 years and 187 resolutions for the 17th Amendment to be adopted, according to The Heritage Foundation Guide to the Constitution. But some states already had moved in that direction by holding non-binding primary elections to select their U.S. senator in which state lawmakers would commit to vote for the winner of these advisory elections.

But although many viewed this as a positive, democratic change, Scalia contended it removed a key plank of the constitutional structure the framers put in place to protect federalism and state interests.

Some state lawmakers in attendance agreed.

“This was a bad progressive idea,” said Assemblyman Michael Carroll, a Republican in Morris Plains, N.J. “The U.S. Senate was much more responsive and accountable prior to the amendment because it had to answer to the states.”

Without the 17th Amendment, said Assemblyman Jay Webber, a Republican in Parsippany, N.J., local party officials could exert influence at the national level.

“In a state like New Jersey, where the county party structure is so strong, you could expect to see influence shift to county chairs and other power brokers,” he said. “What they now do at the state level, they could have been in a position to do nationally.”

Although it might change the priorities of New Jersey’s U.S. senators, repeal of the 17th Amendment probably would not significantly change who served, according to Kim Guadagno, the state’s lieutenant governor.

“The Democrats have a significant registration advantage in the state,” she said. “I’m not sure you would see any kind of major change in who became the U.S. senators. But I am glad to see Justice Scalia focus attention on the amendment and what it meant for the country as a whole.”

Scalia said the trend toward using constitutions as lawmaking documents has increased in recent years as special interests have learned to insert “pet projects” into constitutions.

“A constitution is about setting structure; it is not about writing the preferences of special interest groups,” he said.

In fact, he said, the less done to the Constitution, the better. During the question-and-answer session, someone asked if a constitutional convention would be in the nation’s interests.

“A constitutional convention is a horrible idea,” he said. “This is not a good century to write a constitution.”