Yes, Justice Kennedy, States Can Decide Not to Make Marriage a ‘Dignity-Bestowing Institution’ 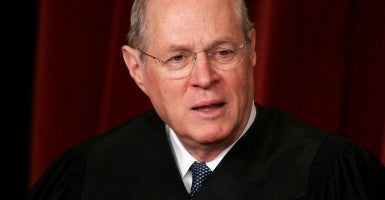 During the oral argument in Tuesday’s marriage case, Justice Anthony Kennedy had a revealing and important exchange with John Bursch, the attorney—representing the state of Michigan—who argued for the freedom of states to make marriage policy.

The exchange highlights the importance of letting the states decide for themselves, not only the definition of marriage, but also the purposes it will serve.

Bursch made the excellent point that same-sex marriage advocates are essentially urging the Court to “take an institution”—that is, marriage—“which has never been dignity-bestowing and make it dignity-bestowing.”

In other words, they want access to marriage because they believe it will establish that same-sex romantic relationships are of “equal dignity” to man-woman relationships.

Taking issue with Bursch’s statement, Kennedy said, “I think many states would be surprised, with reference to traditional marriage, [to learn that] they are not enhancing the dignity of both parties.”

And indeed, Kennedy was correct—in the case of some states.  One of those was New York, whose marriage law was at issue in Windsor v. United States, the 2013 decision that invalidated a portion of the federal Defense of Marriage Act.

In that decision, written by Kennedy, a majority of the Court held that in redefining marriage to include same-sex couples, New York had consciously “conferred upon them a dignity and status of immense import,” one that “enhanced the recognition, dignity, and protection of th[at] class in their own community.”

New York, in other words, had decided to treat marriage as a dignity-bestowing institution and had chosen to use its definition of marriage to confer dignity on same-sex couples and on the gay and lesbian citizens who (generally) make them up.

According to Windsor, moreover, a portion of the Defense of Marriage Act was unconstitutional precisely because it interfered with New York’s constitutional authority to use its marriage law in that way.

Michigan, by contrast, has chosen not to treat marriage as a dignity-bestowing institution at all. Instead, like most other states, Michigan treats marriage as an institution designed principally to connect a man and woman to each other and to any children their sexual union might produce.

If, as Windsor correctly held, the Constitution leaves states with “full power over the subject of marriage,” it follows that they also have the power to choose not to make marriage a dignity-conferring institution—the very choice Michigan and many other states have made.

In short, Windsor’s own logic precludes the Court from second-guessing a state’s choice not to use its marriage laws to confer dignity on anyone—including members of same-sex couples.

Such a decision would represent an enormous intrusion into the states’ authority over marriage—the very kind of intrusion that Windsor condemned.