These Blue States Have Tried the Elizabeth Warren Model. Their Residents Are Fleeing. 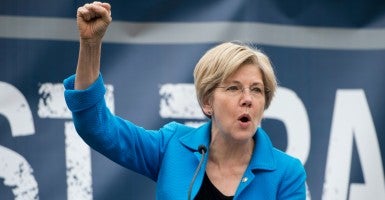 Massachusetts Sen. Elizabeth Warren recently appeared on one of the late night talk shows, beating the class warfare drum and arguing for billions of dollars in new social programs paid for with higher taxes on millionaires and billionaires. In recent years, though, blue states such as California, Illinois, Delaware, Connecticut, Hawaii, Maryland and Minnesota adopted this very strategy, and they raised taxes on their wealthy residents. How did it work out? Almost all of these states lag behind the national average in growth of jobs and incomes.

So, if income redistribution policies are the solution to shrinking the gap between rich and poor, why do they fail so miserably in the states?

Day after day, the middle class keeps leaving California. The wealthy areas such as San Francisco and the Silicon Valley boom. Yet the state has nearly the highest poverty rate in the nation.

The blue states that try to lift up the poor with high taxes, high welfare benefits, high minimum wages and other Robin Hood policies tend to be the places where the rich end up the richest and the poor the poorest.

California is the prototypical example. It has the highest tax rates of any state. It has very generous welfare benefits. Many of its cities have a high minimum wage. But day after day, the middle class keeps leaving. The wealthy areas such as San Francisco and the Silicon Valley boom. Yet the state has nearly the highest poverty rate in the nation. The Golden State, alas, has become the inequality state.

In a new report called “Rich States, Poor States” that I write each year for the American Legislative Exchange Council with Arthur Laffer and Jonathan Williams, we find that five of the highest-tax blue states in the nation—California, New York, New Jersey, Connecticut and Illinois—lost some 4 million more U.S. residents than entered these states over the last decade. Meanwhile, the big low-tax red states—Texas, Florida, North Carolina, Arizona and Georgia—gained about this many new residents.

So much for liberal policies creating a workers paradise.

The least “regressive” tax states had average population growth from 2003 to 2013 that lagged below the national trend. The 10 most highly “regressive” tax states, including nine with no state income tax, had population growth on average 4 percent above the U.S. average. Why was that? Because states without income taxes have twice the job growth of states with high tax rates. Unlike the experts at the Institute on Taxation and Economic Policy, most Americans think that fairness means having a job.

Ohio University economist Richard Vedder and I compared the income gap in states with higher tax rates, higher minimum wages and more welfare benefits with states on the other side of the policy spectrum. There was no evidence that states with these liberal policies had helped the poor much and, in many cases, these states recorded more income inequality than other states as measured by the left’s favorite statistic called the Gini Coefficient.

States are supposed to be laboratories of democracy, right? These laboratories are providing us with concrete evidence that Robin Hood policies don’t help make the poor richer, they make most people poorer. In other words, the blue states have tried the Elizabeth Warren “progressive” agenda and people are voting with their feet by fleeing in droves. The kinds of income redistribution policies that Warren and others endorse can only work by building a Berlin Wall so no one can leave—though I hope I’m not giving them any ideas.