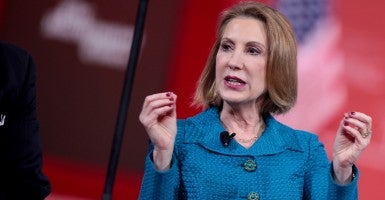 NASHUA, N.H.—Former Hewlett-Packard chief executive Carly Fiorina said America is in need of leaders rather than managers during a speech at the First in the Nation Summit in New Hampshire today.

Fiorina said the American people feel they are losing their sense of “limitless possibility.”

“When we lose that sense of limitless possibility, we are losing the core of who we are,” said Fiorina.

She said that America is in desperate need of “citizenship and leadership.”

“I am reminded when I think about our federal government, I am reminded of the difference between management and leadership,” Fiorina said.

“All of our problems are solvable,” she said. “All of our wounds are self-inflicted. We have everything that we need because all we need is citizenship and leadership,” she continued.

Fiorina cited the scandal at the Phoenix Veterans Affairs hospital as an example of broken government, calling it a “stain on our nation’s honor.”

Asked by an audience member what sets her apart from her GOP rivals, Fiorina cited “executive decision making,” which she described as “making tough calls in tough times, with high stakes for which you’re prepared to be held accountable,” and her track record as CEO of a $90 billion business.

“And I look a little different, too,” she joked.