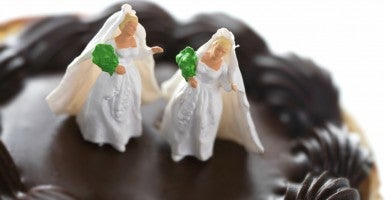 On the surface, abortion and same-sex marriage may seem unrelated. However, as explained in an amicus brief of 100 scholars of marriage, filed in the pending Supreme Court marriage cases and summarized here, the two are closely linked in a short and simple causal chain that the Supreme Court would be wise not to set in motion.

Even in the short time that same-sex marriage has been officially recognized in some states at home and abroad, man-woman marriage rates have declined.

As the amicus brief explains in detail, redefining marriage in genderless terms—which is legally necessary to permit marriage by same-sex couples—undermines the existing social norms of marriage in ways that are likely over time to reduce opposite-sex marriage rates. For example, an “any-two-adults” model of marriage implicitly tells men (and women) that a child doesn’t need a father (or mother), thereby weakening the norm of gender-diverse parenting.  Other norms, such as the value of biological bonding, partner exclusivity, and reproductive postponement until marriage, will likewise crumble.

It is thus not surprising that, even in the short time that same-sex marriage has been officially recognized in some states at home and abroad, man-woman marriage rates have declined—even as marriage rates in other jurisdictions have remained relatively stable.

In the Netherlands, for example, among young women, and after controlling for other factors, there was a net 5 percent reduction in the nationwide opposite-sex marriage rate, and a 31.8 percent plunge in urban, less religious areas. As shown in the graph below, moreover, in just a few years after it redefined marriage Spain saw man-woman marriage rates plummet 36 percent. Similar patterns have been observed in U.S. states for which we have sufficient data. Comparing the last year for which data are available to the year just prior to adopting same-sex marriage, Vermont (-5.1 percent), Iowa (-9.2 percent), Connecticut (-7.3 percent) and Massachusetts (-8.9 percent) all suffered a reduction in their opposite-sex marriage rates.

Yet, from 2009 (the first year of genderless marriage in Iowa and Vermont, and the second in Connecticut) until 2012, the overall U.S. marriage rate remained stable.

Conservatively applying the lowest of these reductions, a 5 percent reduction in marriages among U.S. residents aged 15-44 (from a base of 1.7 million marriages annually) means 85,000 fewer marriages per year. Over a 30-year fertility cycle, that amounts to 2.55 million fewer marriages.

Conservatively assuming that half of the marriage decline over the next generation comes from women who permanently forgo rather than delay marriage, under that scenario 1.275 million more women aged 15-44 would never marry—the equivalent of the entire city of Dallas, Texas.

Married women do not abort children at the same rates as cohabitating women or women living singly. Currently, as shown in the chart below, there are 28.9 abortions per 1,000 unmarried women per year, in contrast to 6.1 for married women: Accordingly, with 1.275 million additional women never getting married, nearly 900,000 more children of the next generation would be aborted as a result of their mothers never marrying. This is equal to the entire population of the cities of Sacramento and Atlanta combined.

And again, the actual increase in abortions would likely be much higher, as most women who would have married will cohabitate rather than live singly, and cohabitating women are three times more likely to have an abortion than a woman living singly.

In short, forcing states to convert the traditional gendered marriage institution into a genderless institution will very likely reduce man-woman marriages by undermining some of the norms that encourage heterosexual couples to marry, which will in turn increase the number of unmarried women and, hence, the number of children aborted.

It is one thing for the people of a state to subject themselves and their children to that risk through democratic processes. It would be quite another for the Supreme Court to subject a states’ citizens to that risk, against their will.