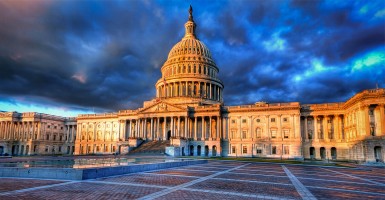 A group of conservative lawmakers in Congress are attempting to stop what they call “ill-conceived” legislation from taking effect in the nation’s capital.

One bill, called the Reproductive Health Non-Discrimination Act, could force pro-life employers in Washington D.C. to hire individuals whose reproductive health decisions stand in opposition to the organization’s viewpoint.

“This coercive measure would ban pro-life organizations in D.C. from even considering a job seeker’s views on abortion as a condition of employment,” said Rep. Diane Black, R-Tenn., who introduced what’s called a “resolution of disapproval” on Monday that, with the support of both chambers of Congress and the president, would override the law in question.

“I hope both chambers of Congress will act swiftly to pass our resolution so that we can stop this ill-conceived law and restore needed protections for those in the pro-life community who call D.C. home,” she said.

Conservatives argue this policy would infringe on the ability of private schools to operate according to their religious beliefs. For example, they say it could force a Catholic school to support a student-led gay pride parade despite the school’s stance on homosexuality.

Rep. Vicky Hartzler, R-Mo., led the effort against that measure today by introducing a separate resolution of disapproval.

“By passing this Act, the D.C. City Council has infringed on the fundamental right of religious freedom,” Hartzler told The Daily Signal. “Americans are protected by the Constitution from being forced by their government to take actions that go against their religious beliefs. Forcing religious schools to go against their beliefs goes directly against our Constitution and shouldn’t be allowed.”

“It is unconscionable that employers should be forced to pay for policies that go against their deeply held religious beliefs, yet that is exactly what the District of Columbia’s legislation would do,” said Rep. Bill Flores, who chairs the committee.

Congress has an obligation to act and exercise its constitutional authority to prevent this flagrant violation of religious freedom. I commend Congressman Black and my colleagues in the Republican Study Committee for joining me in this important fight to preserve and protect our most sacred founding values.

The power to oversee Washington D.C. legislation was granted to Congress under the U.S. Constitution and the Home Rule Act of 1973.

The Senate has already introduced resolutions of disapproval for both the Reproductive Health Non-Discrimination Act and the Human Rights Amendment Act under the leadership of Sens. Ted Cruz, R-Texas, and James Lankford, R-Okla.

Both measures were signed into law by Washington D.C.’s Mayor, Muriel Bowser, earlier this year. Her office did not immediately respond to The Daily Signal’s request for comment regarding the pushback among Republicans in Congress.

Del. Eleanor Holmes Norton, D-D.C., who supports both bills, released a press release today calling the Republican attempt to strike down the Reproductive Health Non-Discrimination Act an “astonishing infringement of an individual’s right to personal liberty.”

“The District’s local law supports the local interests of D.C. residents who do not want to answer to their employers or anyone else for their reproductive choices,” she said. “Disapproval of the D.C. bill by Congress would signal that the constitutional right to privacy has come under historic attack.”

Norton has not yet commented on Republicans’ attempt to also kill the Human Rights Amendment Act, although she previously stated that the “anti-discrimination legislation” is needed to “protect students from discrimination for their sexual orientation at their own schools and universities.”

Norton also maintains that with these bills, there is “no intent to violate the rights of others, such as freedom of religion.”

Conservatives, on the other hand, believe it is especially important to prohibit these policies given that Washington D.C. is home to some of the largest pro-life and faith-based organizations in the world, including the Susan B. Anthony List, March for Life, the Family Research Council, and the Archdiocese of Washington.

But even if they are successful in passing both resolutions through Congress, Republicans would still need the president’s signature to prevent them from going into law. Right now, it is unclear whether President Obama would support that effort should they reach his desk.