China, Not America, Rescues Its Own Citizens Stuck in Yemen 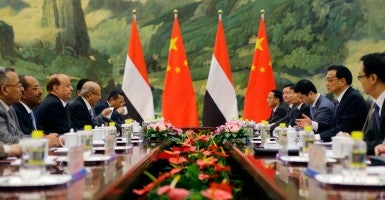 As the situation in Yemen continues to deteriorate, consider this striking contrast between the People’s Republic of China (PRC) and the United States.

One country dispatched naval forces to evacuate its citizens from the collapsing Middle East state. In the process, they evacuated citizens from 10 other countries, including Great Britain, Japan and Germany.

The other country closed its embassy nearly a month ago, but did not evacuate its own citizens who remained behind. Instead, it told them that they were on their own, providing information for contacting other nations’ embassies. That country’s foreign ministry spokesperson observed that the use of military assets would only raise the level of risk.

Which country did which?

It might surprise you that the country that actively evacuated citizens from multiple countries was the People’s Republic of China. Or that it was the American State Department whose spokesperson Marie Harf dismissed the idea of using American military assets to evacuate its citizens.

The Chinese Navy, of course, has been steadily expanding its capabilities, so we should not be surprised that it can conduct such operations.

What is surprising is that the U.S. Navy, whose recent messaging centered on the tagline “A force for good,” should be so absent from the evacuation effort. It’s certainly not because the U.S. is absent from the region.

Indeed, even as Chinese and Indian naval elements have been evacuating citizens from various countries, the American military has been providing assistance to the Saudis, who are conducting airstrikes into Yemen.

One can only wonder what the administration sees as its primary responsibility. As it pulls out the stops on the Iran deal, there are American citizens in Yemen who are undoubtedly wondering where they fit on government priorities.