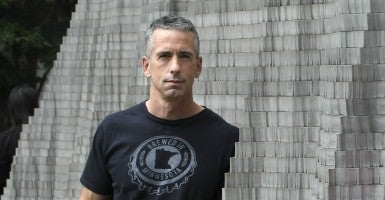 Why is Dan Savage opposing a religious liberty bill that would protect all Americans—Muslims included?

The press release quotes an exchange that I had with Ari Melber,  guest host of “All In with Chris Hayes” Monday night on MSNBC. But the release only quotes one sentence from me, and gives no context. Here’s what they quote me saying: “I think in a free society if a Muslim citizen wants to run a business in accord with their Islamic values, that as Americans we let Muslims be Muslims.”

And then they assert: “every American should stand against the Heritage Foundation[‘s] dangerous view of a society divided along the lines of differing religious belief and a nation where its citizens can be targeted by misguided religious teaching.”

To the contrary, other scholars and I at The Heritage Foundation have published on many occasions in support for the religious liberty of all Americans—including Muslims.

Ari: Ryan, what do you think about folks who look at this and say OK, yes, as you say, it changes the standard to compelling government interest. But what’s going to happen when Indiana runs into say someone running a business who says their business reflects extreme Muslim values and women can’t enter or work there unless they’re in a hijab. Do you think that’s a good idea?

Ryan: I think in a free society, if a Muslim citizen wants to run a business in accord with their Islamic values, that, as Americans, we let Muslims be Muslims—unless it will violate someone else’s rights.

Ari: That’s what I am asking you.

Ryan: So if they’re running a business…

Ari: As a legal and state law matter, can they say that woman have to dress in a certain way to patron the business?

Ryan: I am going to say that that will have to be solved by the courts. The courts will have to settle whether or not there’s a compelling state interest that’s being pursued in the least restrictive means possible. I am saying that this is a good test. And so, the Muslim citizen would have his day in court to say that this is what his religion requires and then we would have to see from the government why they think that they have to coerce his religion. I am in favor of living and let living.

I stand by that answer. Religious liberty is a human right for all people of all faiths. Does Dan Savage agree?

It’s pretty clear why they asked this question, they want to say that this is just like anti-gay discrimination.

But no one is interested in refusing to serve gays and lesbians simply because of their sexual orientation. And no one has ever successfully used Religious Freedom Restoration Acts to defend such actions. As law professor and religious liberty expert Douglas Laycock—a same-sex marriage supporter—notes: