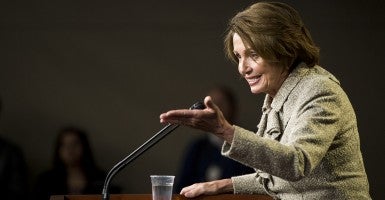 The bill, a bipartisan deal by House Speaker John Boehner, R-Ohio, and Minority Leader Nancy Pelosi, D-Calif., is an effort to make sure Medicare doctors don’t receive a 21 percent pay cut for their services and to reauthorize the Children’s Health Insurance Program, or CHIP, for two more years.

The bill would amend title XVIII of the Social Security Act to repeal Medicare’s Sustainable Growth Rate, the formula that determines how doctors who accept Medicare patients are paid, and replace it with an alternative method.

A report by the Congressional Budget Office found that the plan will increase the deficit by $141 billion over the next decade.

Here are all of the 37 members who voted “nay:” The bill will be taken up for consideration by the Senate.

In a statement, the White House expressed support for the legislation.

Dr. Robert Wah, the president of the American Medical Association, also praised the “doc fix” plan in a statement:

“The American Medical Association (AMA) applauds the U.S. House of Representatives for overwhelmingly passing a long overdue bill to permanently eliminate the flawed Sustainable Growth Rate formula and put in place important Medicare payment and delivery reforms that will improve the health of the nation. While many members of the U.S. House of Representatives, Democrats and Republicans, helped to achieve to today’s result, Speaker Boehner and Minority Leader Pelosi deserve special praise for exhibiting leadership and courage in forging this bipartisan package.”

“We urge the U.S. Senate to take swift action to approve the policy and send it to the President’s desk before the current SGR payment patch expires on March 31,” Wah added.

Matt Kibbe, the president of FreedomWorks, called the legislation fiscally irresponsible in a statement:

“The Sustainable Growth Rate has been a problem since its inception, a misguided though noble attempt to slow down the growth of Medicare spending. A permanent repeal of the SGR does make sense compared to the annual exercise of delaying it, as Congress has done for over a decade.”

“However, keeping physician payments from being reduced has a real (and massive) cost—nearly $200 billion over 10 years—which Congress must account for. Instead this bill as written would increase the deficit by $141 billion over ten years. The minor structural tweaks to Medicare that would supposedly compensate for this spending do not kick in for several years, could easily be put off by future Congresses, and in any case fail stop an increase in deficits even after the ten-year budget window.”