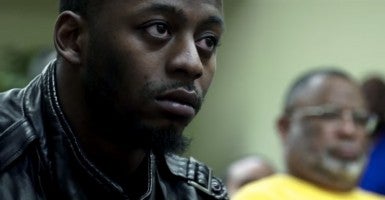 A new miniseries seeks to highlight the stories of people who are successfully reducing poverty—without depending on government.

In the first episode of the miniseries, Ryan says the series looks at those who “are facing all odds, and succeeding.”

“We’ve spent trillions of dollars for 50 years and we’ve barely moved the needle on poverty and it’s gotten even more entrenched in many areas. So if it’s not working, why do we repeat that? We’ve got to break that mold, which has given us this status quo, and go and learn from the people who are really on the front lines, actually fighting poverty successfully,” he adds.

Ryan says there is a “poverty industrial complex” that is “wedded to the status quo.” Too often, he says, politicians are determined to keep funding programs that aren’t working.

Ryan concludes the first episode by saying whoever you are, “I myself … can make a difference.”

Bob Woodson, founder of the Center for Neighborhood Enterprise, tells The Daily Signal he organized a meeting between Ryan and community leaders in Ohio shortly before the 2012 election.

Woodson says Ryan “was moved” by what he heard during that meeting, but didn’t hold a press conference because he didn’t want those involved “to feel used” for political purposes.

Shortly after the election, Ryan called Woodson again and asked him to organize a listening tour across the country so that he might learn more from community leaders about how they were bringing people out of poverty.

The stories told were so important, Woodson says, that he felt they should be put on film.

“I think it was important to capture what he was listening to,” says Woodson. “They have all done what the experts—both right and left—say is impossible to do.”

Woodson says the people who truly reduce poverty are “social entrepreneurs.” They are generally biblically or spiritually based, capable of changing hearts and values. Most of them know what it’s like to be “broken,” but “you never hear them complain.”

“They are able to take responsibility, they’re not blaming anybody,” says Woodson. “They’re humble, they’re servants to other people.”

“Criminal culture,” on the other hand, he calls “selfish.”

Woodson compares most policymakers to “medical examiners studying failure” rather than people who are truly interested in “healing” communities. He suggests more “do what Paul has done.”

“Talk to the organizations that are making a difference in communities, not the ones with fancy budgets and slick brochures,” says Woodson.

John Hart, editor-in-chief of Opportunity Lives, tells The Daily Signal, “These stories are happening all over the country. There are so many wonderful things happening, and our goal is to find them.”

“These stories can be replicated,” says Hart. “We want people to ask, ‘How can I get involved personally?’”

On “Fox and Friends” last week, Ryan called his own role “small” and “tangential,” saying the focus should be on the stories rather than his involvement.

“We have these amazing stories in America of redemption. This is the picture of what people are doing to successfully fight poverty in our communities,” Ryan told the hosts. “This is a manifestation of our ideas. We think we can do a better job of fighting poverty than the status quo, and these stories show what it looks like when we do that.”

“So I would encourage Americans not only to just go look at these videos but draw inspiration from them, and find these stories in their own communities and get involved,” Ryan added.

“Comeback” can be seen on OpportunityLives.com.