Amid Fear of Russian Invasion, Baltic Countries Welcome US Support 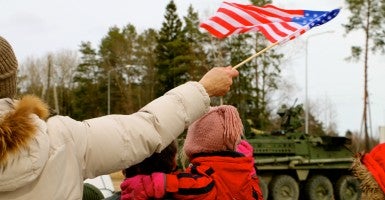 MARIJAMPOLE, Lithuania—Citizens of the three Baltic countries have showed up in droves to welcome a U.S. Army Stryker convoy, which is traveling across Eastern Europe to underscore NATO’s commitment to defend the region from Russia.

Soldiers from Iron Troop, 3rd Squadron, 2nd Cavalry Regiment arrived here Monday after a three-day journey that began Saturday in Tapa, Estonia and passed through Latvia. Along the way citizens lined the roads to take pictures. Some held American flags. Others had young children in their arms, who waved at the passing U.S. military vehicles.

“It’s a great experience, it’s very humbling,” said Army Sgt. Greg Odom, part of Iron Troop. “Waving at them, them waving back, smiling. You can tell you’re bringing joy to them.” The unexpectedly large turnout along Iron Troop’s route underscores a pervasive regional anxiety about the Ukraine conflict, which many fear is a bellwether for future Russian aggression in the Baltics.

“I think everyone in Latvia who values freedom is concerned about what’s going on in Ukraine,” said Viktor, a 57-year-old father of three who took his family to see the convoy at a stop on the outskirts of the Latvian capital of Riga on Sunday.

Viktor, who held an American flag in his hand as he talked, said NATO should build a permanent base in one of the three Baltic countries to deter Russia. He also pressed the U.S. to arm Ukraine, adding: “What’s the alternative? If the bad guy wants to go into your house, do you let him into your house or go out and buy a stronger lock? I consider not arming Ukraine a big mistake.”

For 90 days, 3/2 soldiers have been deployed to Estonia, Latvia, Lithuania and Poland supporting Operation Atlantic Resolve, a series of U.S. exercises in Eastern Europe meant to “reassure NATO allies and partners of America’s dedication to enduring peace and stability in the region, in light of the Russian intervention in Ukraine,” according to a Department of Defense statement.

The convoy, called Operation Dragoon Ride, is the capstone to 3/2’s Baltic deployment. The unit’s personnel and their Stryker armored fighting vehicles, along with a host of support vehicles and local police escorts, are traveling 1,100 miles by road from Estonia to Vilseck, Germany.

Iron Troop’s 150 soldiers—who only two decades ago would have been considered enemies of the Soviet army controlling the region—weren’t sure how civilians would receive them, or if the convoy would receive much attention. But they have experienced a remarkably enthusiastic response, which reminded some soldiers of scenes of the U.S. Army liberating countries in World War II.

“It reminds me of a scene from ‘Band of Brothers’ or ‘Saving Private Ryan,’” said Army Lt. Dan Keogh of Iron Troop.

“You see them along the road, waving at you. They come up and want to shake your hand,” he added. “I’d say 90 to 95 percent of the people are very glad we’re here and wishing we’d stick around. It makes them feel very secure that we’re in the area.”

The convoy ended its first day in Parnu, Estonia Saturday, where a local military brass band braved the subzero temperatures to play American tunes, including “Hail to the Chief.” Crowds weaved through the parked Strykers and Humvees on static display, on which children climbed like jungle gyms. Conversations between soldiers and civilians drifted between recommendations about Estonian beer to what Russian President Vladimir Putin might do next.

“Estonians are worried about a war between Russia and the United States,” said Boris, 37, an Estonian who attended Saturday’s Stryker display in Parnu with his three-year-old son. “We see the news. We see what’s happening in Ukraine. This is a war. This is our reality.”

Dragoon Ride has also highlighted the high regard NATO allies have for the U.S. military.

“If America is here, there will be no problem,” said Estonian Private First Class Richard Kuusk. “The Estonian military is small and not very strong, so it’s important for the U.S. to be here. We see what’s happening in Ukraine, and we don’t want that to happen here.”

Sunday’s journey ended in the Latvian capital of Riga. Despite the cold and wind, anxious crowds gathered and waited to greet the troops at villages along the route. Young children posed with obliging U.S. soldiers as mothers and fathers snapped photos. Lines formed at the back of Strykers with those anxious to look inside or shake a soldier’s hand. At one small village, the local mayor arrived to greet the convoy.

The conversations, again, centered on the Russian threat.

“I hope that nothing like what happened in Ukraine or Crimea will happen here,” said Leonard, 26, a Latvian agriculture worker who attended one of Monday’s static displays. “Here there are many people who think the Russian boys will be a little bit angry about the Americans being here. But I think it’s good they are here. It makes me feel a little bit safer.”

On Monday, Iron Troop entered Lithuania. Officials at the border distributed Lithuanian and U.S. flags to be tied on the radio antennas of the armored fighting vehicles. A short time later, the convoy entered the border town of Salociai, where, once dismounted, the Americans were asked to pose with Lithuanian soldiers while holding machine guns and flexing their biceps. Lithuanian students posed with a banner that read, “Together we can save our freedom.” A woman at a static display in Turi, Estonia for Operation Dragoon Ride on March 21. (Photo: Nolan Peterson/The Daily Signal)

A speaker, whose words were relayed through an interpreter, spoke about the two countries’ shared values and ability to “overcome any common enemy.”

“We’ve had freedom for more than two decades,” the speaker said, “and we’re willing to fight to keep it.”

As the convoy pulled out of town, women ran up and handed flowers to soldiers standing in gun turrets.

“The reaction has been overwhelmingly positive,” said Army Sgt. Garrick Jones, who has deployed to both Iraq and Afghanistan. “It was a lot more than I expected. It obviously means a lot to these people that we’re here. And I’m proud about that.”

This is the first deployment for some of Iron Troop’s younger soldiers. During down time, the more experienced troops shared stories with the younger ones about combat in Afghanistan and Iraq, recounting battles with the Taliban and al-Qaida, the focal enemies of U.S. armed forces for more than a decade.

But the olive green paint scheme on the Strykers, the cold Baltic forests, the thankful crowds on the road, the faces curiously poking out from behind lace curtains and the prolific relics of the Soviet Union portend a different type of war than most current U.S. soldiers expected to fight.

“When I was in ROTC we trained for mountain warfare,” Lt. Keogh said. “But things have changed. Now we’re talking about threats we haven’t had to seriously consider dealing with for decades.”

On Tuesday, the convoy will travel from Marijampole to Suwalki, Poland, passing within about 12 miles of the western Russian territory of Kaliningrad. Last week, Russia announced the deployment of Iskander missiles to Kalinigrad as part of snap military exercises. Iskander missiles are designed to carry both nuclear and conventional warheads and have a range of about 300 miles, which means the missiles in Kaliningrad could strike Poland, Latvia, Lithuania and Estonia.

“We have to face reality,” Viktor said as he waved his U.S. flag and gave a thumbs up to a passing Stryker. “We’re only kidding ourselves and burying our heads in the sand if we think the Russian problem will solve itself.”