No, Being a Climate Change Skeptic Isn’t Like Fearing Vaccines 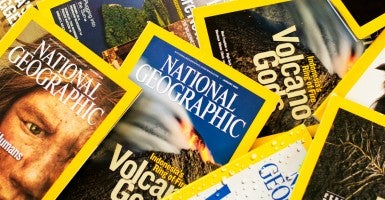 The author bemoans the fact that only 40 percent of Americans (according to Pew Research Center) “accept that human activity is the dominant cause of global warming,” asking how so many “reasonable people doubt science.” Dubbing climate change one of the “precepts of science,” the author opines that climate change skepticism is “dispiriting” for anyone considered a “rationalist.” How could so many dismiss “settled science”?

Actually, there’s a healthy reason that the public has come to distrust government warnings and the scientific experts: they are often wrong.

Ironically, National Geographic’s sermon on settled science could have hardly come at a more inopportune time. In recent months, leading scientists have reversed themselves and have admitted their expert findings and advice were wrong on eating fat. After decades of telling us not to do so, we now learn that fat can be good for your diet and for weight loss. What we all thought to be true based on the expert testimonies, turned out to be precisely the opposite of the truth. Oops.

This kind of reversal happens all the time in the pursuit of scientific truths. Forty years ago the experts warned of a coming ice age, now they are absolutely certain the earth is warming—and some of the same “experts” were on board both scares. National Geographic even acknowledges this inconvenient fact, but explains that even though the climatologists were all wrong several decades ago, this somehow actually helps make the case for global warming.

Wait, for a scientific fact to be true, it has to be testable and refutable. But if any weather pattern confirms “climate change,” then by definition it is neither refutable nor is it testable. That’s convenient.

Here is how the magazine derisively describes one reason why there is such widespread skepticism on climate change: “Many people in the United States—a far greater percentage than in other countries—retain doubts about that consensus [of global warming] or believe that climate activists are using the threat of global warming to attack the free market and industrial society generally.”

Wait. It is an irrefutable truth that many climate change activists are using the climate change issue as a means of attacking free market capitalism. This past summer major environmental groups gathered in Venezuela to solve leading environmental problems like global warming, concluding in the Margarita Declaration “The structural causes of climate change are linked to the current capitalist hegemonic system.” In fact, the statement itself included the motto, “Changing the system, not the climate.”

So how is it delusional paranoia to believe that the climate change industry wants to shut down capitalism when the movement plainly states that this is their objective? And how can a movement be driven by science when its very agenda violates basic laws of economics? I am no scientist, but I am first in line in questioning the wisdom and motivation of a movement whose purpose is to steer the U.S. economy off a cliff toward financial ruin.

Americans are also naturally skeptical that government can do anything to achieve the grandiose task of changing the weather of the planet—because the U.S. government can’t even do simple things like balance its budget, deliver the mail, or run a health care website. If global warming ever becomes a planetary threat, it will undoubtedly be solved by technological progress—not repressive government action—and this is dependent on the very free enterprise system the left wants to tear down.

As for the future of our “industrial society,” the global warming agenda of shifting away from cheap and abundant fossil fuels and forcing nations to adopt much more expensive and less reliable wind and solar powered energy is a frontal assault against industrialization. One of the surest ways of reducing industrial output and moving hundreds of millions of people into poverty is to make energy more expensive. Now we are told that in order to save the planet, we must do just that. The left is promoting the obvious fairy tale that we can somehow power our $18 trillion industrial economy in America with windmills. Europe tried the green energy route and it was an economic fiasco.

One other point on the issue: If there were no ulterior motive of the greens and their only agenda was to stop the rise of the oceans by reducing greenhouse gas emissions, then most honest and rational people would say the solution is for America to build perhaps 40 nuclear power plants over the next decade. In 2013, coal provided just under 1.6 million gigawatts of electricity. One nuclear power plant (such as South Korea’s 6 reactor Yonggwang plant) can provide 50,000 gigawatts annually. So production from just 40 of these plants would equal the entire amount of electricity produced from coal. This would provide cheap and abundant electric power with almost no greenhouse emissions and would not slow industrial progress. But most in the climate change crowd hate nuclear power.

Moving on, National Geographic next makes this claim: “Senator James Inhofe of Oklahoma, one of the most powerful Republican voices on environmental matters, has long declared global warming a hoax. The idea that hundreds of scientists from all over the world would collaborate on such a vast hoax is laughable.”

Laughable? The entire history of the green movement is full of grand hoaxes and even catastrophic advice, dating back to the modern-day birth of this movement with Rachel Carson’s “Silent Spring”. This was the green anthem which played a big part in the banning of DDT around the world—a move which contributed to millions of Africans losing their lives from malaria. The lesson of the false DDT scare is that there are very real dangers to false scares and faulty science.

As for the claim that scientists would never “collaborate on a hoax,” what about the scandal of climategate, which the left to this day pretends didn’t happen? Shouldn’t the fact that some the leading climate change researchers were caught red-handed manufacturing evidence and suppressing data even cause some degree of skepticism by the media and the scientific community as to the validity of the “science”?

Then there is the reality that nearly every environmental scare of the 1970s and backed by hundreds of scientists as well as media like National Geographic, was proven to be a hoax? In the 1970s we were told that the world was overpopulated, running out of energy, food, water, minerals, getting more polluted, and that the end result would be massive poverty famine and global collapse. Every aspect of this collective scientific wisdom was spectacularly wrong.

In 1980, a “collaboration” of hundreds of the top scientists in the United States government issued a report called The Global 2000 Report to the President which was a primal scream that in every way life on earth would be worse by 2000 because the world would run out of oil, gas, food, farmland, and so on. Just a few brave souls like Julian Simon and Herman Kahn dared to contradict this conventional wisdom. They were disparaged then—just as climate change skeptics are today—as dangerous lunatics. Yet on ever score these iconoclasts were right and the green scientific consensus was wrong. What was the cost? Start with the fact that hundreds of millions of Chinese—mostly girls—are demographically missing today because of the barbaric one child policy, which the greens all supported as a way to save the planet.

False scares lead to a massive misallocation of resources as governments chase nonexistent goblins, which leaves less money for solving real societal ills. For one-tenth of the cost of the global warming crusade, if the world concentrated on bringing clean water, cheap energy, and schools to desperately poor areas of the world, child mortality would fall dramatically and living standards would rise.

The final insult by the National Geographic article is this: “It’s very clear, however, that organizations funded in part by the fossil fuel industry have deliberately tried to undermine the public’s understanding of the scientific consensus by promoting a few skeptics.” So everyone who dares question the climate change theology has been bought off by industry polluters, but the climate change research brigades are pure as snow. Really?

In 2010, Climate Depot identified more than 1,000 international scientists, including many current and former United Nations International Panel on Climate Change (IPCC) scientists, who voiced skepticism about the climate change consensus and the IPCC—a consensus which National Geographic seems to think is the gospel of global warming. Are 1,000 scientists “a few,” and are they all bought off by the Koch brothers?

No doubt industry funds some of these skeptics, but it is also true that the U.S. government and private foundations are providing billions of dollars of funding—Obama wants $8 billion this year—for climate change research and activities. Needless to say, the best way to get defunded and to go unnoticed is to conclude global warming isn’t happening. Would anyone want to fund the green-industrial complex if the earth’s temperature weren’t on a catastrophic path of warming or cooling?

National Geographic concludes by saying the debate is over on climate change. Period. What is clear is that this “settled science” argument isn’t meant to advance scientific inquiry and understanding, but to shut it down. What is the left so afraid of that they want to cut off all debate and disparage all who question the consensus? Once liberals believed in “questioning authority,” now they insist on universal allegiance to every conventional wisdom.

Once when I was at The Wall Street Journal, I wrote a column about the myth of disappearing polar bears. (Here we have yet another example of how the left simply manufactures false crises to advance an ideological agenda.) After I spoke with one of the few experts in Alaska who is involved in the population counts of the polar bears and he reported to me that the population is up not down, he called me after the article ran in a panic and said his job was in jeopardy for reporting the politically incorrect facts. This is the real tragedy of science today: Political correctness now has invaded the research facilities.

Scientific truth is the first casualty in ideological crusades like that of climate change. I am in no position to know whether it is happening or not, but as with half of Americans I question this settled science, if only because of the Stalinist approach which commands everyone to believe. The tolerance movement refuses to tolerate a minority opinion. By pounding skeptics as imbeciles, stooges of industry, and right-wing Republican ideologues, National Geographic has managed to set back science, not advance it.