The Hunt for the Clinton Emails 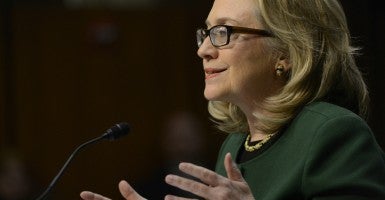 A large body of evidence—Clinton’s emails from the days and weeks surrounding the Sept. 11, 2012 attack—has been kept out of reach by Clinton and her aides. This means that congressional reports on Benghazi as well as that of the Accountability Review Board must be considered inconclusive.

Instead of using a state.gov email address, as other State Department employees must, Clinton chose to use for official business only her private Blackberry and her own Clinton.com email accounts which were hosted on a private Internet server outside the State Department system, located at her home in Chappaqua, N.Y. This server, by the way, was shared with her husband’s Clinton Foundation.

Following the discovery of Clinton’s private emails, the House Select Committee on Benghazi, chaired by Rep. Trey Gowdy, R-S.C., has issued subpoenas for “all communications” from Clinton “related to Libya” and to the State Department “for other individuals who have information pertinent to the investigation.”

In fact, were it not for the dogged Benghazi investigations, the Clinton emails might not have come to light. The request for documents dates back as far as nine days after the Benghazi attack, to Sept. 20, 2012 and to Rep. Jason Chaffetz’s House Subcommittee on National Security, Homeland Defense and Foreign Operations, part of the House Committee on Oversight and Government Reform.

Almost two years later, on August 11, 2014, a batch of emails submitted by State to the new House Select Committee on Benghazi, included for the first time Clinton emails, sent from the address [email protected]. Another dump of 850 pages of Clinton emails arrived in February 2015, still a fraction of the 55,000 e-mails she had turned over to State for archiving.

After the news of the emails broke in The New York Times, Clinton finally addressed the issue at a news conference in New York. Defending her email practices, she also revealed that she has destroyed a further 30,000 emails, and will refuse to turn over her Internet server for investigation.

At the very least, the timeline of the efforts to get to the Clinton communications, first published by The Washington Examiner, indicates why so many Congressional investigations of the attack in Benghazi have come up short. And it has not been for want of trying to get to the facts.