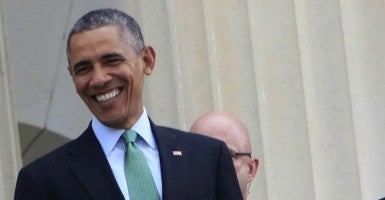 After a failed attempt to block implementation of the president’s executive action on immigration by not funding it through the Department of Homeland Security funding, Congressional Republicans are seeking another strategy to combat the president’s action.

One writer has raised the idea of blocking judicial nominees until the president relents.

Curt Levey, the president of the Committee for Justice, wrote in an op-ed for The Wall Street Journal that Congress should block all of President Obama’s circuit court nominees.

“If Republicans opt for a plan, their best bet is a vow not to confirm the president’s appeals-court nominees until he rescinds his immigration fiats. This strategy has virtues that others do not,” wrote Levey.

Levey called this approach “more modest,” with a “better chance of success” than previous efforts.

“Judicial appointments are an important part of any president’s legacy because federal judges serve for life, long beyond the terms of the president and his executive appointees. Judicial confirmations slow to a trickle during the final year of a presidential term, so Mr. Obama knows that 2015 is the last good year for getting judges confirmed,” wrote Levey.

In an interview with The Daily Signal, Levey said that this approach would mean congressional Republicans took “a principled stand.”

“These are the ones who will ultimately determine the constitutionality of Obama’s order,” said Levey. “So they say ‘we won’t approve the very judges who will rubber-stamp the orders.’”

Levey called it a “no-lose” strategy, either resulting in Obama backing down from his orders and a “victory for the Constitution,” or “vacancies” in the judicial system for the next president to fill instead.

Levey added that there is “limited potential for public outrage” unlike blocking high-profile nominees such as attorney general nominee Loretta Lynch, or shutdowns of the government or various agencies.

“It will be a test of wills, but one I think we can win,” said Levey.

“Senators concerned about President Obama’s unconstitutional amnesty program for illegal aliens should give serious consideration to Curt Levey’s proposal that they hold up the president’s appeals court nominations,” said von Spakovsky. “As I pointed out recently, holding up nominations is one of the few, effective tools the Senate has under the Constitution to check an imperial president.”

“In fact, I don’t think the Senate should approve any nominations until the president backtracks,” added von Spakovsky.