Why Ukraine Is a Mess and How It Got There 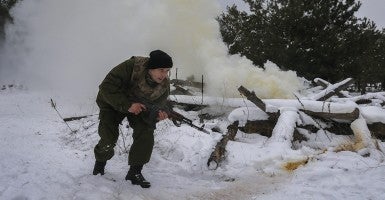 In Ukraine, the crisis is messy, the solutions elusive and the outlook bleak.

That is the view of Eugene Rumer, a senior associate and director of the Russia and Eurasia program at the Carnegie Endowment for International Peace.

Rumer spoke at The Heritage Foundation recently about his new book, “Conflict in Ukraine: The Unwinding of the Post-Cold War Order,” which chronicles the unfolding crisis in Ukraine “up until the first Minsk talk” of last September, which he called a “good place to stop” because the violence and movements had hit a stalemate.

“The purpose was not to offer a blow by blow,” he said, but to take a look at factors that led to the crisis.

First was the story of Ukraine itself.

“The history [of Ukraine] … [is one] that lacks a traditional statehood,” Rumer said. The country “does not have a living memory [of statehood].”

This hurt in two ways, he said. First, because of the historical conflicts, almost all of Ukraine’s neighbors have a claim against what is now Ukrainian territory, including Russia.

Second, Ukraine’s foray into self-government stumbled along lines predictable for a country with little history of self-governance. After the breakup of the Soviet Union, he said, an oligarchy rose in Ukraine, similar to the one in Russia. Once in charge, the oligarchs “fixed the political system” to ensure their own success.

According to Rumer, the sentiment against Ukrainian President Viktor Yanukovych and the old guard of politicians reached its peak when Yanukovych walked away from the Deep and Comprehensive Free Trade Area agreement with the European Union. Yanukovych abandoned the agreement, which would have brought Ukraine closer to Europe, after being bribed by Moscow and Russian President Vladimir Putin. He then fled to Russia as the uprising worsened.

But others share in the blame, he said. Ukraine’s leaders were trying to game both Brussels and Moscow. The EU leaders in charge of the trade agreement were critical of Putin, leading to distrust in the Kremlin. The Russians’ “knee-jerk reaction” to invade Ukraine after the deal fell through was a “bridge too far.”

And the United States, he said, was “nowhere to be seen” at the crisis’ critical moments because of its focus on the Middle East.

“The costs that everyone is paying for this is terrible,” said Rumer, who concluded saying damages and reconstruction of Ukraine will cost billions.

The failures of U.S. foreign policy continue in the region, James Carafano, vice president of the Kathryn and Shelby Cullom Davis Institute for National Security and Foreign Policy, told The Daily Signal

“What remains shockingly apparent is that almost no one believes the White House has any serious strategy on how to deal with Putin,” Carafano said. “That’s a very worrying assessment since it is clear that none of the parties to the conflict have a clue how this plays out. We have a situation where each side is playing with fire in the heart of Europe, and the U.S. continues to look on like a bemused bystander.

“It is also clear that Putin has complete disdain for President Obama. That’s an equally shocking development given that the administration placed so much face in the Russian reset to address U.S.-Russian relations. Yet, we are in the moment where something like the reset could really prove its worth—and its pretty clear the reset was worthless. Obama invested so much and got more than a negative return.”

Rumer said the whole world was taken by surprise by what happened in Ukraine. He said he visited the country in 2013 and saw no signs of what was to come.

“There was no indication…that this country and certainly the city of Kyiv would erupt in mass uprising,” Rumer said.

Then why? Because, Rumer said, people in Kyiv were “fed up” with all politicians, even the reformers.