Are We Ready to Use Bitcoin? 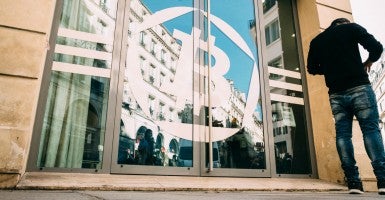 Victor Hugo, author of “The Hunchback of Notre Dame,” famously said “All the forces in the world are not so powerful as an idea whose time has come.”

Perhaps Bitcoin is just such an idea?

Digital currencies are still rather new, so it’s hard to know for sure. But for all of their faults, they do seem to be catching on. In less than eight years we’ve gone from zero to nearly 600 different digital currencies.

The original digital currency, Bitcoin, still represents the bulk of the total market value, but the spread of alternatives is rather impressive. Especially considering that the world is so dominated by government-created currency. Clearly there’s a demand for some type of alternative medium of exchange—and a supply of venture capitalists eager to fill that void.

Right now, two of the biggest threats to the digital currency idea are overly zealous government regulators and economists who spread misinformation.

Consumers should certainly be concerned with Bitcoin-related financial risks, but that goes without saying for every aspect of commerce. People owe it to themselves to learn all they can about this monetary instrument. So I highly recommend two recent Wall Street Journal stories on Bitcoin. And, with respect to the latest piece, I strongly suggest some supplemental reading. (Aside from this column, George Selgin has an excellent post addressing a specific problem).

Anyone taking me up on this offer can safely rule out some of the faulty reasons critics offer up against Bitcoin’s longevity.

These flawed ideas have popped up most recently in the new Journal story titled “Do Cryptocurrencies Such as Bitcoin Have a Future?” The piece features two academics’ differing views, and the anti-Bitcoin professor repeats some mistakes made often by critics.

Bitcoins are an odd sort of commodity. They are not financial instruments. The value fluctuates widely, in line with changing views regarding the overall usefulness of the bitcoin payment system and the speculative manias surrounding such views. There is no financial logic behind bitcoins’ face value.

All of these items have a value that can fluctuate widely in line with all sorts of changing views. And none is really immune to speculative manias. There’s actually quite a bit of financial logic there, even if one doesn’t agree with or particularly care for the ideas.

Regardless, Tymoigne lumps digital currency in with financial securities. This broad view essentially treats all monetary instruments as securities, but it’s a flawed view because not all currencies are properly classified as such. (Selgin’s post provides an excellent explanation of this issue.)

Tymoigne goes on to argue:

Bitcoins, meanwhile, violate all of the rules of finance. There is no central issuer guaranteeing payment at face value to the bearer; in fact, there is no underlying face value, and subsequently no imputed value at maturity, which means they are completely impractical for use in servicing of debt.

Completely aside from the history of centrally issued money becoming worthless, Tymoigne’s criticism misses a crucial point. The value of money has nothing to do with any sort of face value or imputed value at maturity outside of that which people give it. What ultimately gives money value—indeed, what actually makes something money—is the fact that other people will accept it as such.

Without that acceptance, you’ve got just another good—a piece of paper, a chunk of silver, a bag of sugar, etc.

With that acceptance, though, you’ve got money even if the federal government didn’t print it and stamp a picture of George Washington on it.

Many people don’t even think about this fact today, but history is pretty clear: People started using commodities as money, and governments later took that function over to increase its own revenue. (Often to finance wars.)

But throughout history, money has existed without being centrally issued at all—even in the U.S. In fact, until the 1930s U.S. Federal Reserve notes represented redeemable claims on gold. That is, each paper note could be redeemed for a known (ahead of time) quantity of gold.

These notes were centrally issued, but technically they were not money. The notes (currency) represented gold, the precious metal that was actually the money. Because consumers relied more on using notes as if they were money, the eventual delinking from gold became possible.

Once FDR ended gold redeemability, the U.S. government’s currency was effectively an I.O.U. nothing. (Technically, FDR ended it for individuals; Richard Nixon ended all official forms of redeemability internationally in 1971).

So, in spite of what Bitcoin critics seem to think, the truth is that official U.S. currency doesn’t really come with a guarantee. The government only certifies that you have its official money.

Governments have typically been able to exploit only the first kind of faith by taking over an item people were already using as money. And governments have always had a rough time with the second type of faith.

Bitcoin’s programming can’t really “do” anything about the first type. Either people accept digital currency and use it, or they don’t. Its programming does, however, solve the second problem.

It ensures that the nominal quantity of Bitcoins will grow no higher than 21 million. There’s a predictable quantity based on a programmed rule, so there’s no risk of an over-eager central government creating too much money and inflation.

Maybe digital currency’s future isn’t as a bright as it seems, but it definitely has this advantage over central banks. That’s a major point in Bitcoin’s favor.

Either way, public policies should be designed so that they don’t bias the public away from using digital currencies. People should be allowed to decide for themselves whether they want to use digital currencies, and that’s really the only way we’ll find out if Bitcoin’s time has come.