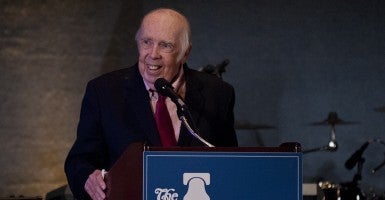 Stan Evans at a Heritage Foundation dinner in his honor in 2011. (Photo: Chas Geer)

He had only to stand before a microphone to bring smiles to the faces of an expectant conservative audience. Would he report the latest grab for power from the Land of Leviathan—Washington, D.C.? Would it be an ironic remark about the current liberal hero—Kennedy, Johnson, Carter, Clinton, Obama? Or would it be a Wildian reflection on the dependability of conservatives when they come to power?

“The trouble with conservatives,” he once observed, “is that too many of them come to Washington thinking they are going to drain the swamp, only to discover that Washington is a hot tub.”

That unique conservative voice is now stilled. M. Stanton Evans, journalist, author, teacher, commentator and raconteur, has died. Throughout his distinguished career, Evans confronted the liberal orthodoxies of the day and readily dispatched them with scrupulous research, an elevated Augustan style and a wicked wit.

In the mid-seventies, he laid down his most famous axiom, sometimes referred to as Evans’ Law of Political Perfidy: “When ‘our people’ get to the point where they can do us some good, they stop being ‘our people.’”

Of the left-wing National Council of Churches, he commented:  “The National Council of  Churches is alarmed at the Pat Robertson phenomenon, for mixing religion and politics. That’s a mistake [the Council] doesn’t make, since it has nothing to do with religion.”

Evans edited or wrote for every important conservative journal in America. He was a contributing editor to Human Events for more than 40 years and an associate editor of National Review for more than a decade. At 26, he was named editor of the Indianapolis News, making him the youngest editor of a daily metropolitan newspaper in America. For 13 years, he wrote a syndicated newspaper column.

Evans’ most famous axiom, sometimes referred to as Evans’ Law of Political Perfidywas “When ‘our people’ get to the point where they can do us some good, they stop being ‘our people.’”

Following Vice President Spiro Agnew’s public criticism of the biased news media in the late sixties, Evans became a regular commentator on CBS television and radio as well as National Public Radio and the Voice of America. Humor was rarely absent from his commentaries.

During the 1982 Falklands Islands crisis, precipitated by Argentina’s attempt to take back some real estate over which Great Britain had enjoyed sovereignty for many years, Evans was moved to comment. The crisis, he admitted, was a difficult one for conservatives. “On the one hand, we like imperialism. On the other hand, we like military dictatorships.”

He was the founding director of the National Journalism Center, which trained an estimated 1,500 young journalists—including commentator Ann Coulter and former Wall Street Journalist columnist John Fund—who have gone on to work for major news channels, magazines and newspapers across the country. At the same time, and for over two decades, he served as an adjunct faculty member at Troy State University’s school of journalism.

“The most important element in a story is you,” he once told Troy University students, “because you have to get the story accurately, completely and fully in order to do our job as a journalist correctly.”

Evans wrote two of the most enduring books in the conservative canon—”Revolt on the Campus” and “The Theme Is Freedom.” In “Revolt,” published in 1961, he discerned a conservative revolt on the American campus against liberal conformity and collectivism and made a fearless prediction.

While admitting that the majority of students were liberals, Evans wrote that some five percent were “articulate, forceful and resourceful” conservatives. In twenty years, he predicted, they would be “the nation’s journalists, teachers, clergy and leading businessmen.” In fact, he said, the conservative movement in 15 or 25 years “is going to be taking possession of the seats of power in the United States.”

That seemed far-fetched at a time when liberal John F. Kennedy had just been elected president, Walter Cronkite was “the most trusted man in America,” Bob Taft and Joe McCarthy were dead, and only a lonely senator from Arizona named Barry Goldwater was articulating conservative ideas. And yet, twenty years later, almost to the day, Ronald Reagan, a self-described proud conservative was elected the 40th president of the United States.

In 1994, when secularists seemed to be winning the culture war, Evans argued that Western liberty and American free institutions are products of our religious faith and cannot survive without them. In contrast to the radicals of the French Revolution, he wrote in “The Theme Is Freedom,” the Founders who engineered American independence were true conservatives. They sought to preserve the best elements of their Western heritage, especially a faith in God, while achieving political sovereignty.

These arguments for freedom helped Republicans that year to achieve a majority in the House of Representatives for the first time in 40 years and inspired George W. Bush’s faith-based presidency. They can be seen and heard in the demonstrations and protests of the Tea Party movement.

In “Blacklisted by History,” published in 2007, Evans examined the career of one of the most controversial politicians of the twentieth century, Sen. Joseph McCarthy of Wisconsin.

Many historians have written that from 1950 to 1954 a “reign of terror” raged in America during which the loyalty of patriotic Americans was impugned, innocent people lost their jobs, and public dissent was nearly suppressed. One man and one man alone, they state, was responsible: Joe McCarthy.

Not so, insisted Evans, and in a 663-page masterpiece of research and analysis, he shows that McCarthy was right—there were dozens of communists in the State Department. Furthermore, McCarthy’s investigative methods were careful, thorough and of the highest ethical standard. His adversaries were the ones who practiced “McCarthyism” and conducted a Star Chamber investigation of the Wisconsin senator.

Making it clear that he was no fan of McCarthy, the late columnist Robert Novak wrote that Evans made “a convincing case” that McCarthy did not drive “liberal” officials from public office, did not accuse “innocents” of being communists, and did not degrade the public process by accusing rivals of treason.

Born in Kingsville, Texas, and educated at Yale and New York University (where he studied under Ludwig von Mises), Evans received, among other awards, honorary degrees from Syracuse University, Grove City College and Francisco Marroquin University in Guatemala. He was a long-time chairman of the American Conservative Union and of the Education and Research Institute. He was editor and publisher for many years of the magazine Consumers’ Research. In 2009, Accuracy in Media honored him for his “outstanding contributions to journalism.”

Once queried by Time as to his politics, Evans replied: “I think my philosophy is pretty close to the farmer in Seymour, Ind. He believes in God. He believes in the U.S. He believes in himself. This intuitive position is much closer to wisdom than the tormented theorems of some of our Harvard dons.”

Spoken like a true Yale man. Rest in peace, Stan.