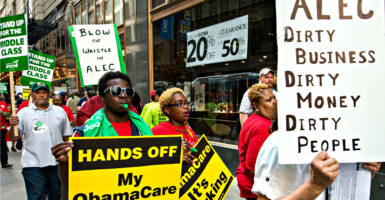 Labor, environmental, and other activists protest Aug. 8, 2013, outside the 40th annual meeting of the American Legislative Exchange Council, or ALEC, at Palmer House in Chicago. (Photo: Brian Cahn /Zuma Press/Newscom)

The decision by the seniors group AARP to drop its membership in an influential legislative reform coalition is the latest example of the left’s successful pressure on corporations and other organizations to disown the group.

“People should be concerned when any group believes solutions come from intimidation rather than discussion,” @ALEC_states says.

As of December, according to the liberal website SourceWatch.org, “at least 108 corporations and 19 nonprofits” announced cutting ties with the American Legislative Exchange Council in the previous five years.

“A great silencing is taking place across America,” ALEC spokesman Bill Meierling told The Daily Signal. “All people should be deeply concerned when any group believes solutions come from intimidation rather than discussion.”

Of all the organizations in the conservative movement that have antagonized the left during the Obama presidency, this one stands out.

The organization that became known as ALEC grew out of informal meetings of conservative activists in Chicago during autumn 1973. Forty-three years later, the exchange council includes “nearly one-quarter of the country’s state legislators and stakeholders from across the policy spectrum,” according to its website.

ALEC now has a long history of successfully promoting local and state legislation built on the constitutional principles of limited government, the free market, and federalism.

While the exchange council has attracted both positive attention and negative scrutiny since its founding, well-funded, well-organized opponents on the left have made a concerted effort over the past five years to marginalize, discredit, and defund it.

As previously reported by The Daily Signal, eight of the Senate’s most liberal Democrats also targeted ALEC last month in a letter to national and state-based think tanks and policy organizations demanding to know the names of donors.

Conservative policy analysts and think tank leaders who are familiar with the assault on ALEC have some insight.

A critical turning point came after the 2010 midterm elections, they say, when left-leaning lawmakers lost ground in statehouses across the country, making it possible for ALEC’s proposals to become policy at an accelerated pace.

Matthew Vadum is a senior vice president at Capital Research Center, which investigates the “aims and activities of left-liberal special interest groups.” Vadum said he suspects that because ALEC worked successfully to “frame the debate” during the Obama presidency, it aroused the ire of liberal groups such as Common Cause.

Those groups now see some of their most prized policy achievements in danger of losing their grip at the local and state levels, he said. Protesters march through a residential neighborhood in Phoenix on Nov. 30, 2011, on their way to picket the American Legislative Exchange Council during ALEC’s meeting at the Westin Kierland Resort and Spa. (Photo: Jack Kurtz/ZumaPress/Newscom)

At least 10 states took up ALEC’s model proposal to block the federal health care law by 2013, Vadum wrote. But what rankled the left above all else is the exchange council’s commitment to passing voter identification laws as a safeguard against voter fraud, he says.

Two opponents, The Nation magazine and the Center for Media and Democracy, have led the charge against ALEC for the past five years.

The Center for Media and Democracy is a left-leaning investigative journalism outfit based in Madison, Wisconsin, that describes itself as a watchdog on the use of public relations by corporations and political figures. The center, founded in 1993 by progressive Wisconsin writer John Stauber, publishes SourceWatch, PR Watch, and BanksterUSA.

In July 2011, the magazine and the center partnered on a series of articles highlighting ALEC’s model bills and emphasizing its connections with the Koch brothers and their companies, organizations, and foundations.

The left’s opposition to laws requiring voters to produce photo identification figures prominently in the articles. One, for example, says ALEC is “peddling ‘Voter ID’ laws to disenfranchise voters.”

The Center for Media and Democracy operates a website called ALEC Exposed, also dating to July 2011, that focuses on ALEC’s funding sources and policy proposals. The site criticizes corporations and nonprofits that support ALEC.

“We support ALEC and the work it is doing on criminal justice reform legislation, protecting free speech, and promoting policies that remove barriers to opportunity for all Americans, especially the least advantaged,” Holden said in an email to The Daily Signal.

The pressure tactics appear to have met with considerable success.

As of December, according to the Center for Media and Democracy’s SourceWatch.org, “at least 108 corporations and 19 nonprofits—for a total of 127 private sector members—have publicly announced that they cut ties with the American Legislative Exchange Council.”

Four of the 127 returned to ALEC, according to the website, but the left continues to claim new scalps such as AARP.

Kevin Kane, president of Pelican Institute for Public Policy, a free market think tank based in New Orleans, said the anti-ALEC campaign is undermining free speech and the free exchange of ideas.

“There has been an important tactical shift in the campaign against ALEC and other organizations that do not toe the line on certain policy issues,” Kane told The Daily Signal. “Many organizations on the left are no longer content to engage in a debate over the issues, instead they seek to silence opponents by convincing donors and sponsors that certain policy positions are beyond the pale and therefore unworthy of consideration.”

In an email, Kane added:

This creates an environment where policymakers and citizens are less likely to be exposed to a wide range of arguments over important policy questions. Organizations like Pelican Institute do not benefit from this development, but the real losers in this campaign are policymakers and their constituents, who are denied the many benefits that flow from robust and open debate over important policy questions. AARP ‘Decides Not to Renew‘

Most recently, liberal advocacy groups succeeded in pressuring AARP, the nation’s most powerful organization of older Americans, to drop its affiliation with ALEC.

AARP, formerly the American Association of Retired Persons, announced Aug. 4 it would not continue membership.

In a letter that same day to Jo Ann Jenkins, chief executive officer of AARP, liberal groups accused the exchange council of pushing for policy changes that harm senior citizens.

“AARP’s support of ALEC is antithetical to your mission to fight for the issues that matter most to families—such as health care, employment, and income security,” the letter to Jenkins said.

The letter, which called on the seniors organization to withdraw from the exchange council, was signed by the American Federation of State, County, and Municipal Employees; the Center for Media and Democracy; Social Security Works; and ClimateTruth.org, among other groups.

“After hearing from many of you, we’ve decided not to renew our membership to ALEC,” AARP said in a post that evening on its Facebook page. Politico broke the news.

The liberal organizations’ letter to AARP’s Jenkins said in part:

By partnering with ALEC, you have allowed it to use the powerful AARP brand to lend credibility to legislation harmful to seniors that is introduced in statehouses across the country. ALEC has been at the forefront of protecting drug companies and their ability to charge unreasonable prices, has been a strong advocate against the Affordable Care Act and has opposed Medicaid expansion, forcing lower-income retirees to make terrible choices between paying medical bills and buying groceries. …

ALEC also blocks action on climate change, causing irreparable harm to the world we will leave our children and grandchildren. ALEC has spearheaded calls for a dangerous Article V convention to enact a federal balanced budget amendment that would ultimately gut critical programs for seniors like Social Security, Medicare and the Older Americans Act. ALEC has also spent years pushing the dismantling of retirement security for older Americans by promoting the elimination of defined benefit pensions and the privatization of Social Security, at least in part, in favor of risky investment accounts.

“AARP should be ashamed and embarrassed at its action in withdrawing from ALEC,” Hans von Spakovsky, a senior legal fellow at The Heritage Foundation, told The Daily Signal. He added:

This is another sign of how much the progressive left wants to silence anyone who disagrees with them on matters of public policy. Their basic betrayal of the tenets of the Bill of Rights and the First Amendment is disgraceful—and AARP’s going along with this censorship is contemptible.

Meierling, vice president of public affairs for the American Legislative Exchange Council, told The Daily Signal that left-leaning activist groups are working to silence organizations such as ALEC that hold alternative views on public policy.

All seniors benefit when their issues are discussed openly and with as many decision makers and stakeholders as possible. It is a shame that under the banner of good government, activists groups such as the Center for Media and Democracy would pressure any organization out of the free exchange of ideas.

“The left succeeded in pressuring AARP to disassociate itself from ALEC by using the same smears and pressure tactics it has long used in its jihad against ALEC,” Capital Research Center’s Vadum said in an email to The Daily Signal.

“Here the left claimed ALEC hates minorities and elderly people because it backed electoral integrity laws like photo ID requirements that combat election fraud,” he said. “It’s an absurd argument but it’s been quite effective in hitting ALEC in the pocketbook.”

Vadum also argues that ALEC receives relatively little support from foundations and no government grants, according to tax filings.

That contrasts with the National Conference of State Legislatures, its “left-wing counterpart,” he said, which “relies heavily on taxpayer funding.”

Ken McIntyre contributed to this report.  It has been modified to correct the period during which SourceWatch counted organizations that left ALEC.