How Does Your State Rank in Church Attendance? 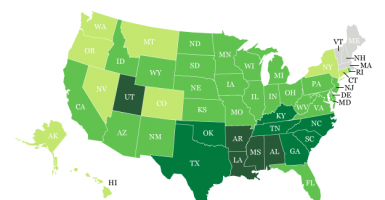 A new Gallup poll offers some clues about Americans’ church attendance—and the sizeable difference depending on the state where you live.

Gallup asked 177,030 American adults, “How often do you attend church, synagogue or mosque—at least once a week, almost every week, about once a month, seldom or never?” It ranked all 50 states and the District of Columbia according to how many responded that they attend religious services “at least once a week.”

Utah is followed by Mississippi, Alabama, Louisiana and Arkansas.

Residents of Vermont are least likely to attend church weekly, followed by New Hampshire, Maine, Massachusetts and Washington State. Gallup notes that the New England region reports the lowest levels of church attendance in the nation, with Connecticut and Rhode Island not far behind the rest of the region, at Nos. 10 and 17, respectively.

Residents of the South report the highest church attendance rates.

Utah is the only state in the nation where a majority of residents report attending a religious service weekly.

In the Heritage Foundation’s 2014 Index of Culture and Opportunity, Byron Johnson, a professor at Baylor University and the founding director of the Baylor Institute for Studies of Religion, writes that though media reports “suggest a consistent if not dramatic decline” of faith in American life, during the last 40 years “there have been only small variations in church attendance.”

“The number of American atheists has remained steady at 4 percent since 1944, and—church membership has reached an all-time high,” he writes.

Gallup notes that states with the highest levels of church attendance “are traditionally red states.”

See how your state ranks here: