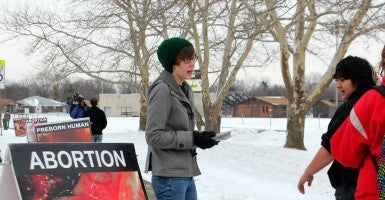 A recent pro-life protest in Columbus, Ohio, drew a heated response from a neighbor upset by the group’s graphic depiction of aborted fetuses on signs across from his house. It’s also sparked questions of how far is too far when it comes to showing images of abortion.

The signs of demonstrators, led by pro-life group Created Equal, were destroyed by an unidentified man outside Beechcroft High School in Columbus earlier this month.

“Get them off or I’ll take them,” says the man, who identifies himself as a homeowner across the street from the school. A video released by the group shows him kicking, bending and breaking the corrugated plastic signs, then throwing them into the street, despite oncoming traffic.

In the video, the man can also be seen shouting at demonstrators, and taking the group’s signs out of the hands of Jami Beer, Created Equal’s director of campus outreach. He can be heard objecting to the graphic nature of the signs, which depict what Beer called “the aftermath of abortion”—the remnants of aborted children.

Beer said that she doesn’t like looking at the graphic images either, but they need to be shown so people can see what abortion really looks like.

“There is no way to make abortion look pretty,” said Beer. “The nature of abortion is disturbing. High school students are old enough to have abortions. They have a right to know what it looks like.” While many pro-life organizations are united in their desire to peacefully protest, the use of graphic images is a point of debate within the movement.

Janet Morana, executive director of Priests for Life and the co-founder of the Silent No More Awareness campaign, told The Daily Signal that she supports “showing the victims of abortion” during pro-life demonstrations.

“These images have value,” said Morana. “As Father Frank Pavone says, ‘America will not reject abortion until America sees abortion.’”

Morana said that she has participated in demonstrations similar to Created Equal’s outside of high schools. She’s witnessed firsthand students’ reaction to the images.

“Young people respond to it,” said Morana. “When they are shown the truth, they no longer support abortion.”

Morana stressed that free-speech rights allow all causes to peacefully protest. “You can disagree, you cannot censor,” she said.

Mallory Quigley, communications director at Susan B. Anthony List, told The Daily Signal she could only think of one instance in which her organization used a graphic image. The group sent an email using a crime-scene photo from the murder trial of Philadelphia abortion doctor Kermit Gosnell, and that they did include a disclaimer in the subject line.

“In that particular instance it was valuable,” said Quigley. “Sometimes people need to see it to believe it.” Abby Johnson, a former abortion clinic employee and founder of And Then There Were None, a ministry that helps abortion workers leave the industry, generally discourages the use of graphic images. In her experience, they do more harm than good.

I watched them be ineffective for many years … from inside the abortion clinic. A perspective that most do not have. I watched for several years as women would literally run away from those holding graphic signs. They would come into my office and ask us why those people were holding them. We used that as an opportunity to point out how crazy the prolifers were and that they would do anything to prevent women from making the choices they felt they needed to. It was an AMAZING way for us to build camaraderie inside our clinic.

Created Equal, the group at the center of the Columbus incident, stands by its use of the graphic images—and even got an apology from the man who destroyed its signs.

“In a culture killing its children, unfortunately sometimes abortion advocates act violently against those who defend the children. Nevertheless, we refuse to be intimidated into silence,” Mark Harrington, the executive director of Created Equal, said in a statement.

In an interview with The Daily Signal, Beer, the woman who was confronted in Columbus, said the mission of Created Equal is to “raise a generation of 21st century preborn defenders,” which includes ministering to high school and college students.

Not showing the graphic images, she said, “silences the voices” of the 2,900 children the Guttmacher Institute estimates are aborted every day in the United States. Beer said that during the incident, she did feel that she and her group were in danger, and called the man’s behavior “threatening” and “angry.”

Columbus’ 10TV declined to identify the man in the video, but reports that he describes himself as neither pro-life nor pro-choice but rather offended by the graphic images used. The news station reports he is willing to financially compensate Created Equal for the damage. Beer said that the signs destroyed were worth about $120.

Beer said that charges had been filed against the man, but were “on hold” because of his apology.