Former Drug Czar, Federal Prosecutor Argue Against Marijuana Legalization: ‘The Science Does Not Support It’ 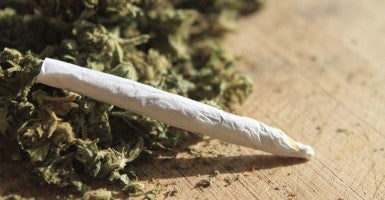 There are a growing number of medical marijuana dispensaries across the United States and a majority of Americans who support legalization. But two critics of the drug said the science points to serious problems with pot.

Speaking at a Heritage Foundation event Monday, former drug czar William J. Bennett and federal prosecutor Robert A. White outlined the evidence in their new book, “Going to Pot: Why the Rush to Legalize Marijuana Is Harming America.”

“Almost all evidence is on our side, the side of science and fact,” said Bennett, former director of the Office of National Drug Control Policy under President George H.W. Bush.

“The legalization advocates are winning the debate,” added White, a former assistant U.S. attorney for the District of New Jersey. “They are organized and well-funded. And they are winning because the public is not informed of the harms of marijuana.”

White said misinformation was part of the problem. He pointed to the fact marijuana is stronger today than in 1970s.

“Tetrahydrocannabinol, the psychoactive drug in marijuana, has risen from 5 percent to an average of 13 percent as a part of marijuana. In some medical dispensaries in Colorado, it now makes upwards of 30 percent of the drug,” White said.

White went on to list off some of the negative effects of marijuana on users, noting that it suppresses the dopamine receptors in your brain, won’t wear off like beer or alcohol, and causes a drop in your IQ if used for an extended period of time.

White said marijuana also increases the chance of a heart attack by the user.

>>> Busting the Myth That Marijuana Doesn’t Kill, in 1 Minute

The impact on children caused both authors’ concern.

Citing findings from the Substance Abuse and Mental Health Services Administration’s 2013 National Survey of Drug Use and Health, White said the numbers are even more stark in Colorado. There, 10.2 percent of 12-17 years olds have used the drug.

“In the 18-25 range, which are critical years for brain development, nationally, 18.78 percent of the age group have used in the past month, while in Colorado it stands at 27.26 percent,” White added.

>>> Rocky Mountain High: 30% of Homeless in Denver Shelter Came to State for Marijuana

When asked by the an audience member if marijuana is worse than alcohol, Bennett and White admitted that America still has a problem with underage drinking and use of prescription pills.

“It’s not worse than alcohol,” said Bennett. “We know we have a problem, and we have not managed to keep those things from kids. Colorado was supposed to eliminate the marijuana black market, but it did not.”