Why Marty McFly and a DeLorean Traveled to Capitol Hill 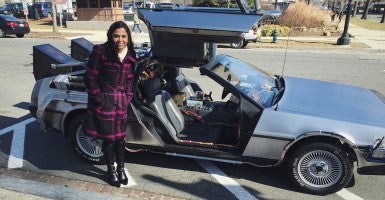 In the movie “Back to the Future Part II,” Marty McFly travels in a DeLorean to 2015 to keep his son out of jail.

Now that the date has actually arrived, two policy groups, Americans for Tax Reform and Digital Liberty, are leveraging the movie to bring attention to the Telecommunications Act of 1996. The law, signed by President Bill Clinton 19 years ago today, was crafted before widespread use of the Internet.

With the U.S. Capitol as a backdrop, the DeLorean—fitted with its own flux capacitor—and a lookalike Marty McFly made an appearance in Washington, D.C., Thursday. The Daily Signal was there to find out more about the issue.

“Technological reality caught up with movie magic. Sadly, telecommunications regulation has not kept up with technology,” said Katie McAuliffe, federal affairs manager at Americans for Tax Reform and executive director of Digital Liberty, in an op-ed for The Hill.

Americans for Tax Reform also challenged people to use the hashtag #CommActUpdate on Twitter to help spread the message.

No dog in this fight, but kudos to #CommActUpdate for creating a buzz on Cap Hill w back-to-future DeLorean! #McFly pic.twitter.com/0dVNn3eBB2

Congress doesn't need a time machine to get the 1996 Telecomm Act into 2015 #CommActUpdate @DigitalLiberty pic.twitter.com/aNtzDi9zSl

Creative campaign for #CommActUpdate: parking the DeLorean near Congress to remind us how tech has changed in 19yrs pic.twitter.com/q40IXzCSrH