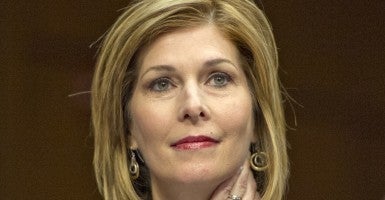 Investigative journalist Sharyl Attkisson says the government is growing increasingly savvy at evading reporters through the use of social media and other avenues to push “their propaganda and spin.”

Speaking at a Hillsdale College conference on American journalism, the Emmy Award-winning journalist and Daily Signal senior independent contributor called out the press for going soft in pursuit of the truth.

Attkisson said that “unless something pretty drastic happens, it stands to continue and get worse no matter who is president next.”

The author of “Stonewalled: My Fight for Truth Against the Forces of Obstruction, Intimidation, and Harassment in Obama’s Washington” said it’s not too late for journalists to turn the tide. After President Obama leaves office, Attkisson said, the press must decide if it will renew traditional coverage or continue to be complacent.

“Hopefully,” Attkisson said, “things will get better and we will look at this as a low point.”

In addition to her comments on government transparency, of which she recently testified before the Senate Judiciary Committee, Attkisson said reporters today are failing “even to follow basic rules that journalism students know.”

At the same time, the White House has mastered ways to spin the press. Pointing to Obama’s recent YouTube interview with Internet celebrities, Attkisson argued this is just “one way they get around answering tough questions.”

Sharyl Attkisson explains that the press must renew traditional unbiased coverage or continue in its complacency. Do you agree?

Instead of acting transparently, Attkisson believes the White House continues spreading misinformation. She reports that groups like Media Matters for America broadcast “false information” and “operate directly for the Obama administration and Hillary Clinton.”

In other cases, the Obama administration stonewalls.

An investigative reporter with CBS News during the Benghazi terrorist attacks, Attkisson said the White House has shirked responsibility for “the biggest story, the biggest scandal, the biggest cover up.”

As a result of the administration slowdown, “the public has gotten numb” to the controversy and “doesn’t see the stark contrast” between the government’s initial claims and facts uncovered in government documents.

Attkisson says her congressional sources don’t think even they will get answers from the White House. “There’s really nothing we can do,” they tell her, explaining, “if the executive branch just says no, then at some point that’s just what you get.”