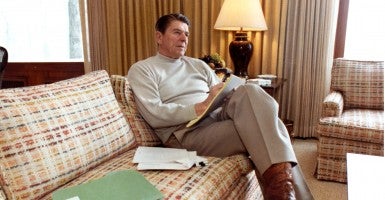 Men -- and one woman -- who ponder being a successor to President Reagan tweeted in celebration of his birthday. (Photo: Newscom)

On the 104th anniversary of his birth, Ronald Reagan was saluted today on Twitter by many of the fellow Republicans who are seriously thinking about seeking to become one of his successors as president.

Joining them was Sen. Bernie Sanders, I-Vt., with a Reaganesque tax message that surely would have made the Great Communicator chuckle. Sanders, a socialist, is considering challenging former Secretary of State Hillary Rodham Clinton for the Democratic nomination for president.

Here are their birthday greetings, some more personal than others, in the order the presidential hopefuls tweeted them.

Today we celebrate a man whose courage was matched only by his warmth. We continue to celebrate you, Mr. President. pic.twitter.com/tX7YRSXVKA

Next came Sanders, creatively quoting the Gipper to make a point on tax policy:

Remembering the words of President Reagan on his 104th birthday: "Man is not free unless government is limited." http://t.co/mJocpdSYuo

Thinking about Ronald Reagan on his birthday. #leadershipmatters #ImissReagan

Jeb Bush, the former Florida governor whose brother knows something about the presidency and whose father was Reagan’s vice president before also being elected president, managed to work in his “rise” theme:

Today would have been President Reagan's 104th birthday. Let’s honor his legacy by giving all the opportunity to rise pic.twitter.com/4fFhm04ePX

Ohio Gov. John Kasich, who is spending a lot of time promoting a balanced-budget amendment to the Constitution, made faith his theme:

On his birthday, I'm reminded how Pres. Reagan showed us that faith can guide us, make us stronger, and move us fwd. http://t.co/teosS1cnA2

In with her own Reagan quote on human potential was Carly Fiorina, the former CEO of Hewlett-Packard who some see as a worthy opponent to Hillary Clinton:

"There are no great limits to growth because there are no limits to human intelligence, imagination and wonder." Happy Birthday Pres Reagan.

Rick Perry, until recently the governor of Texas, chose to share recent remarks he made in Reagan’s honor:

Reagan's belief in American exceptionalism inspired us. On his birthday today, let's reflect on his legacy. http://t.co/bpNuGNEBrH

Technically, 2012 nominee Mitt Romney took himself out of the running a week ago, but it seems only fair to let him in on this celebration.

As we remember #RonaldReagan on his birthday, let’s celebrate his legacy of optimism that inspires Americans even today.

As the day drew to a close, Sen. Rand Paul, R-Ky., delivered a special birthday card via Twitter:

Happy Birthday Ronald Reagan! You're a leader who made us all proud. pic.twitter.com/CZC9g3CL79

Indiana Gov. Mike Pence, who will be the keynote speaker at CPAC’s Ronald Reagan Dinner on Feb. 27, had reason to be thinking of him. (Click on the link after Pence’s message for a historic picture.)

Remembering today Pres Ronald Reagan on what would have been his 104th birthday. Happy Birthday, Mr. President: http://t.co/VZg9UbEQU7