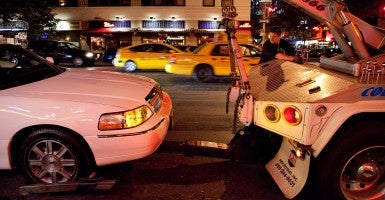 Give me your tired, your poor, your huddled masses yearning to breathe free.

But parking your tires, your Ford or your Honda with a Massachusetts license plate on the streets of New York City overnight certainly won’t be free.

At least that’s the idea behind a proposal to ban overnight parking for out-of-state cars in New York City.

Michael Miller, a Queens assemblyman, wants to tow away any cars left on city streets between 2 a.m. and 5 a.m. that don’t have a New York license plate.

Tourists could be in for a rude awakening when, upon awakening, they find their car is missing. Instead of spending the day at one of New York’s famed museums or attractions, they’ll be navigating the depths of the city’s impound lots and forced to pay at least $185 to get their vehicle back.

Miller has his reasons for pushing the proposal.

“By registering out-of-state, you are either committing fraud by not registering your vehicle in New York state or you are avoiding paying state Department of Motor Vehicles fees,” he told the New York Post.

Miller said his proposal would allow out-of-staters to purchase an “exemption sticker” to protect their vehicles from the city’s predatory tow trucks.

AAA says the policy would be “shortsighted and unfair” because it would prevent some people from coming to New York City and spending the night.

It could also be another blow in a long-simmering conflict between the city and private rental services like AirBnb, which has been banned in the city but continues to operate.

Tourists looking to spend the night in New York City will now have an added reason to find a hotel with a parking lot or garage, rather than leaving their car on the street while sleeping in an apartment.