We Need the Government to Leave the Private Sector Alone 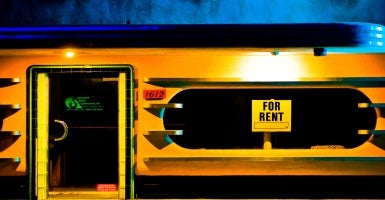 The president and his supporters don’t want to admit it, but the anemic recovery they’re happily taking credit for comes on the heels of a financial crisis that was caused by a host of terrible government policies.

Virtually every aspect of the meltdown can be traced to federal policies, many of which were designed to boost home mortgages. It’s all laid out in Hidden In Plain Sight: What Really Caused the Worlds’ Worst Financial Crisis and Why it Could Happen Again, a new book by American Enterprise Institute’s Peter Wallison. It’s a must read for anyone who wants the straight dope on what caused the 2008 crisis. (Here’s an excellent review by Alex Pollock.)

Wallison’s book is a valuable corrective, because too many policymakers have been getting away with a false narrative.  These officials want us to believe the crisis had nothing to do with the government’s affordable housing goals, and that deregulation and private-sector greed caused the meltdown.

Yet the financial crisis was, in truth, firmly rooted in a set of ill-conceived government policies that allowed too many people to take out home mortgages.

The practice of using federal agencies to make it easier for citizens to finance homes dates to the 1930s, and the 1977 Community Reinvestment Act significantly extended that idea.  But then the S&Ls crashed in the late 1980s, and federal meddling in the mortgage market really took off.

S&Ls had long served as a principal source of home financing in the U.S. Their demise created a huge void, one that the government sponsored enterprise (GSE) Fannie Mae was only too happy to fill.

And there’s no doubt Fannie Mae’s managers used the company’s special government relationship to their advantage.  For years, the company had used its ostensible affordable housing mission to fend off efforts to fully privatize its operations.  Fannie’s brass shored up their political cover in 1992 when they successfully lobbied Congress for explicit affordable housing goals.

In fact, The New York Times reported (in 1991) that the GSEs literally wrote much of the bill that required HUD to establish three explicit affordable housing goals for the GSEs.

Soon after, Fannie partnered with President Bill Clinton in what should be the textbook case for why it is so important to keep government officials out of the private sector.  Clinton’s 1994 National Partners in Homeownership, a private–public cooperative, arbitrarily set a goal of raising the U.S. homeownership rate from 64 percent to 70 percent by 2000.

To complete its part of the deal, Fannie Mae announced its Trillion Dollar Commitment, a program that earmarked $1 trillion for affordable housing between 1994 and 2000.

It shouldn’t surprise anyone this policy ended badly.  For starters, there was a good reason the home ownership rate had steadied near the 64 percent mark: the private mortgage marketplace had already helped most qualified borrowers buy a home.

The only way the GSEs could meet their affordable goals was to lower their credit standards, so that’s exactly what they did.  Wallison’s book documents this fact by citing numerous government officials and GSE executives. These lower standards became an even bigger problem because the GSEs’ underwriting guidelines drove the entire home-financing market.  That is, even standards for loans that weren’t typically sold to Fannie and Freddie were influenced by the GSEs’ guidelines.

The goals and the lower standards were bad enough on their own, but their impact was magnified because of other government policies.  These policies ensured that risky mortgages would be spread throughout the financial system and magnify any liquidity problems that mortgage defaults may cause.

The short version deals with the Basel capital requirements, a set of rules that the federal government imposed on U.S. commercial banks in the late 1980s.

These rules sought to better match capital to the risk level of banks’ assets. That is, they tried to reduce the amount of capital banks held based on the perceived riskiness of specific bank assets.

From the beginning, the rules provided capital relief to banks that held GSE-issued mortgage-backed securities (MBS).  Then, in 2001, the Federal Reserve (jointly with the FDIC and OCC) amended the rules to provide even more capital relief.

Combined, these policies served to standardize the market and fill it with mortgages that, only a few years prior, would have been deemed high risk.

Some may find it ironic that these policies, in the name of making housing more affordable, created a housing bubble.  But there’s nothing unexpected about the sharp increase in housing prices these policies produced.

Start with a completely arbitrary goal of increasing home ownership when most qualified homebuyers already own homes.  Add to the mix government-sanctioned, if not imposed, lower credit standards along with abundant financing.

For good measure, throw in government-imposed capital requirements that all but beg companies to hold the MBS tied to these lower quality mortgages.

One doesn’t need a Ph.D. in economics to predict this combination of policies will lead to higher consumer debt, higher home prices, and an unstable financial system.

The scary thing is that the system that gave us the crisis – affordable housing goals, shaky underwriting standards, and the GSEs – remains largely in place.

These policies need to be reversed if we want to prevent another crisis. A roadmap for doing just that is contained in The Heritage Foundation’s new guide to federal policy reform: Opportunity for All, Favoritism to None.